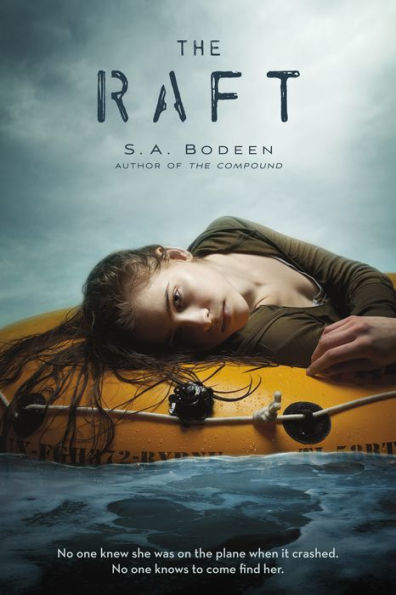 “An albatross skeleton lay not far from me, feathers still clinging to the bone. Maybe I would end up like that. Maybe it would be years before anyone stumbled across my body. Maybe, when somebody did find me, they wouldn’t even be able to tell who I was,” Robie. –The Raft

Robie feels lucky living on the small island of Midway which sits in the middle of the Pacific Ocean. But sometimes being the only kid on the island makes her feel like she’s going crazy. To keep Robie sane, she goes to visit her aunt in Hawaii. After her aunt suddenly has to leave the island for work, Robie decides to catch a cargo flight home. When the plane hits a nasty storm, Robie thinks everything will be alright. Robie is wrong.

Suddenly, Robie is submerged in water. She’s fighting for her life. Then Max, the only other survivor, pulls her onto a raft, and that’s when the real terror begins. They have no water. Their only food is a bag of skittles. There are sharks. They have no idea if help is on the way. How long can they survive in the middle of the ocean?

The Raft is a sensational survival story that has several twists that will surprise readers. The story is told from Robie’s point of view, which allows her fears to jump to the surface. When Robie is on the raft, she finds a “Survival at Sea” card that adds irony to the story, as well as helps Robie stay alive. Robie clearly loves nature but also fears nature’s violence. Through Robie’s experiences, the story highlights the dangers humans pose to wildlife by throwing trash into the sea; this aspect of the story will encourage readers to make small changes that can dramatically help ocean creatures survive.

The story doesn’t only focus on survival at sea. Max is dealing with overcoming a tragedy. As his story unfolds, Max retells his story of love and loss. Readers will be pulled into his story and will cry at his loss. Max’s story adds suspense and a unique aspect to the story.

The story has short chapters, and some of the paragraphs are only one sentence; this makes the story easy to read as well as increases the story’s suspense. Robie makes several references to The Hunger Games which adds an interesting element to the story. The Raft is a fast-paced story that pulls the reader in from the very first chapter. Fans of survival stories will absolutely enjoy The Raft. For those who want to dip their toes into other ocean survival stories, add Adrift by Paul Griffin and Surrounded by Sharks by Michael Northrop to your reading list.

“An albatross skeleton lay not far from me, feathers still clinging to the bone. Maybe I would end up like that. Maybe it would be years before anyone stumbled across my body. Maybe, when somebody did find me, they wouldn’t even be able to tell who I was,” Robie. –The Raft