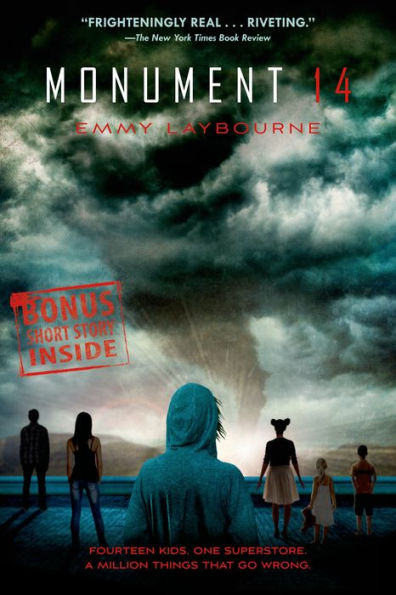 One minute, fourteen kids were on the bus heading towards school. Then the gigantic sized hail began. The bus crashed and everything changed in an instant.

Six high school kids, two eighth-graders, and six little kids are trapped in a chain superstore, while chemicals fill the outside air. They must work together in order to survive. However, the longer they are in the store, the more difficulties they must face—they must keep others out, they must take care of the younger children, they must fight the escalating tension between each other—all the while trying to come up with a plan to survive.

Monument 14 is a suspenseful survival story written from the point of view of one of the teenagers. Although the premise behind the book is interesting, some of the events in the story are farfetched. The narrator describes some graphic fights, including one in which an adult is shot and killed. One of the pre-teen girls is sexually assaulted. Another character raids the pharmacy and is high for most of the story.