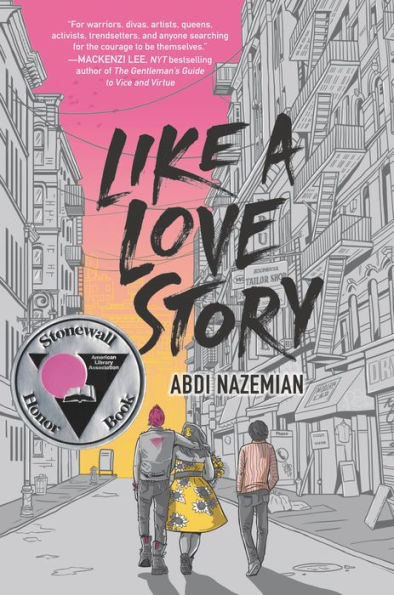 “I want to contribute something. To capture all this, so that a hundred years from now, or a thousand years from now, people will remember it all and know that we existed. That we lived,” Art. —Like a Love Story

Like a Love Story takes place in New York City in the late 1980s. The AIDS crisis is devastating gay communities, and activists are protesting the government’s reluctance to extend research or support to those affected. The narration rotates between three teenagers: Reza, Art, and Judy.

Reza is new in town, having recently immigrated to New York from Iran, where his family escaped a violent revolution. In the closet with a nearly hypochondriac fear of AIDS, Reza starts at a new school and soon meets Judy and Art, who have been best friends since childhood. Both Judy and Art are committed to gay culture and gay activism under the tutelage of Judy’s uncle Stephen, an AIDS patient and well-known member of the gay community. Art is an out-and-proud gay teenager, who is assertive and upfront about his identity. Brash and unafraid, Art is full of anger at the injustice of the AIDS crisis. Judy, a straight girl who shares Art’s love of Madonna and fashion, supports him in everything and shares his love of fashion and film.

A romance develops between Reza and Judy. But Reza, a closeted gay, knows he can only hold out for so long before his secret comes out. The first two acts of the novel largely concern their false relationship, eventual falling-out, and then the ensuing romance between Reza and Art. Each of the three narrators has a fairly equal stake in the plot, and each brings their own narration, perspective, and personality to the story. Like a Love Story is largely a coming-of-age story, but it is really three coming-of-age stories as each character grapples with their sexuality, their future, and their imminent emergence into the adult world.

Like a Love Story is essential reading for anyone who wants to learn about the AIDS crisis or the origins of the modern gay rights movement. Without preaching or lecturing, the narrative paints a rich and engaging portrait of the political climate through its three narrators. Each character in Like a Love Story has a completely unique voice; readers can open the book to any page and immediately know who is speaking.

Regardless of their own identities, readers will see themselves in the characters because of how authentically they are portrayed. Each character has uncertainty about their place in the world, an imperfect relationship with their parents, a faulty understanding of how the world works, and a yearning to belong—and readers get to see them grow as the story progresses.

Like a Love Story has some of the most compelling adult figures in a genre where adults are often one-dimensional and cast to the side. The relationship that each teen has with their parents is complicated and imperfect, but masterfully written. It is genuinely heart-wrenching to see Art’s interactions with his homophobic parents, and it is genuinely moving to see Judy’s conversations with her mother evolve throughout the story.

Like a Love Story does not shy away from sexual content and depictions of sex acts, but it’s one of the few books that feels justified in its usage. Characters frequently talk of condoms and bodily fluids. The mechanics of AIDS transmission and the effects of the disease are explained as Uncle Stephen succumbs to infections. Readers who pick up this book in 2020 will already know the ending to some extent. Thanks to modern medicine, many people today can live full lives with HIV and new pharmaceuticals can help prevent transmission. However, the characters don’t know this, and they can only grieve the dead and dying members of their community while fighting for rights and recognition. The story highlights the importance of community, activism, and love.

“I want to contribute something. To capture all this, so that a hundred years from now, or a thousand years from now, people will remember it all and know that we existed. That we lived,” Art. —Like a Love Story