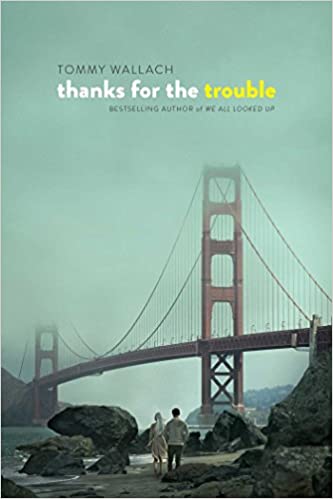 Other books by Tommy Wallach

“They only think they want it, Parker. But nobody really wants anything forever. Just for longer than they get it,” Zelda. –Thanks for the Trouble

Parker Sante has not said a single word in 12 years; not since he witnessed his father die in a fatal car accident. Instead, he writes out his thoughts in a journal and watches other people interact; studying their movements and actions until it is the perfect moment to steal something that others would never know is gone. That’s exactly what he is doing when he locks eyes with Zelda. The striking, silver-haired vixen who seems to entrap him with just one look. Suddenly, not only does he want to steal from her, but he wants to get to know her. To talk to her.

However, Parker quickly realizes that Zelda isn’t everything he thought she would be. She’s a dream, but one that may be coming to an end very soon. When Zelda receives a mysterious phone call, she makes it clear she plans to end her life. While she won’t tell him the details, Parker knows he must change her mind. So, the pair spend the next few days doing everything that Parker hopes will make Zelda fall in love with life again. It includes one wild night at a Halloween party (a scene that is very unlike Parker), becoming the middleman in a very public breakup at the movies, and even letting Zelda convince him to apply for college. However, as time passes, Parker falls more in love with Zelda and is increasingly frustrated because he knows nothing about her.

Zelda remains an enigma to Parker until he demands she tell him who she is and why she is going to jump off the Golden Gate Bridge. But the story that Zelda begins to tell Parker is one he never saw coming. Instead, it is filled with unbelievable lies that Zelda insists are her reality; a reality that causes her to remain young forever. But Parker isn’t buying it. People didn’t just stop aging and live forever…or did they?

As Parker races against time, trying to change Zelda’s mind, he realizes that maybe she isn’t the only one who needs saving. After all, Parker was living his life at half volume until Zelda came along, and now that she’s here, he doesn’t want to let his life slip away again. He just may have to figure out how to live life to the fullest on his own.

The odd, yet endearing friendship between Zelda and Parker adds a vibrancy to the novel that immediately draws in the reader. Considering all the challenges Parker faces, witnessing his social progression throughout the story will leave the reader with a sense of pride. For example, by the end of the novel Parker begins to make real friends at school and starts to form the connections that he always wanted but never had. While Zelda shows some signs of vulnerability, an air of mysteriousness remains around her. There are moments where even the reader will question if what Zelda is saying is true or just another made-up story to help her conceal her identity. Because of this, the reader may find themselves frustrated by Zelda’s consistent games, but they will simultaneously be entranced by her.

While Thanks for the Trouble contains a great plot line and immense character development, there is a heavy presence of suicidal thoughts. Multiple times, Zelda mentions that she intends to jump off the Golden Gate Bridge, and she eventually carries through with the action. While Zelda discloses to Parker that she cannot age and that is why she intends to commit suicide, the reader is still left with a feeling of uncertainty around that reasoning. Therefore, it never feels like we get a complete reason as to why Zelda wants to commit suicide, which makes the novel heartbreaking. While Parker consistently attempts to get Zelda to rethink her decision to commit suicide, that is the only form of suicide prevention that is present within the novel. The novel does not discourage suicide, and it does not discuss methods of intervention.

Aside from the heavy topic of suicide, the plot will keep readers on their toes and the mystery never lets up. Readers never know what will happen next, which makes Thanks for the Trouble a must-read. The story is heartbreaking and honest in a way that many novels for young adult readers are not. The novel plays on the impulsiveness of teenage feelings when it comes to love and relationships, creating a sense of understanding between the reader and the characters. Parker’s devotion to Zelda reminds the reader that love is the greatest kindness you can show someone. Once more, Zelda’s journey through the novel and her eventual death brings light to the idea that life is fragile in every form, and that we may never know how much time is left. All in all, the novel makes resounding commentary on how love, life, and death are the three sole things that can never be stopped, even if we wish they could be.

Other books by Tommy Wallach

“They only think they want it, Parker. But nobody really wants anything forever. Just for longer than they get it,” Zelda. –Thanks for the Trouble