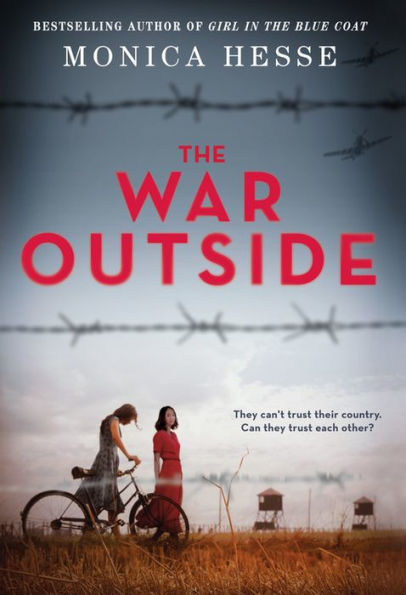 Margot’s German-American family lived in a small Iowa community. After attending a rally, her father is detained in the family internment camp in Crystal City. In order to keep the family together, Margot and her mother follow him. Since being in the internment camp, her mother’s health is deteriorating and her father is changing. Instead of being a loving father, he is spending time with Nazis and learning how to hate.

Haruko wants to pretend that Crystal City is just another town. She’s made friends and goes to school. On the outside, she looks calm, but on the inside, she is stricken by fear. She questions her father’s innocence and wants to know what he is hiding. Her soldier brother, who is fighting in the Japanese-American unit of the US Army, is also keeping secrets. Haruko wants to know the truth, but will the truth help her family or destroy it?

A dust storm throws Haruko and Margot together. Despite being of different ethnicities, the two start a secret friendship. The two begin to trust and rely on each other. Can this fragile friendship last in the desert prison camp or will the two discover that hate is stronger?

The War Outside gives readers a glimpse of the fear caused by World War II and explains why the internment camps came to exist. Margot’s family highlights how being imprisoned in an internment camp begins to change everyone. Margot’s father’s anger begins to control his actions, and he begins spending time with Nazi sympathizers. Margot struggles with the fact that she loves her father, but doesn’t approve of his actions. Margot knows that “marching with a Nazi swastika is not like algebra, where you can get the wrong answer but be right some of the time. This is all wrong.”

The story is told from the perspectives of both Haruko and Margot, which allows the reader to understand the motivation of both characters. The struggles of the internment camp bring Haruko and Margot together, and they both have romantic feelings for each other. While the girls’ attraction is hinted at, the topic is not explored in depth which makes it hard to relate to the girls’ strong feelings for each other. In the end, Haruko wonders how she can make a decision based on a moment, “for a person I have known barely a month? For a feeling that was so fast and so strong, and that I can barely even describe?” The reader is left wondering the same thing—why are the two girls so devastated by the other’s actions?

There are several family conflicts that should have been explored in more detail. Even though it is clear that the girls love their families, the story lacks family interaction that would have brought their relationships into focus. In the end, the characters lack development, the ending seems rushed, and the conclusion falls flat. Although the story is an interesting read, it will be easily forgotten.