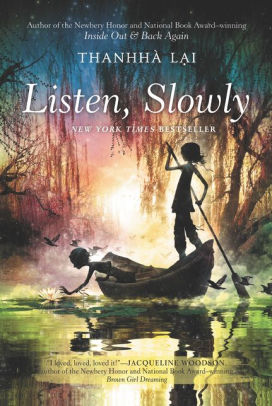 Other books by Thanhhá Lai

The beach. Friends. Boys. Mia planned her summer around fun. Then her father drags her to a small village in Vietnam where Mia is to watch over Bá (her grandmother). However, Mia doesn’t want to learn about her roots—she’s a California girl, who has no desire to meet relatives, travel to Vietnam, or give up the comforts of her life.

As Mia struggles with mosquitoes, lack of privacy, and a language barrier, she learns about her family heritage as well as what is really important in life. However, the story isn’t just about Mia; it’s also about Bá and her need to find out what happened to her husband in the Vietnam War.

As Mia tells her story in Listen, Slowly, the reader is entertained with funny stories as well as introduced to Vietnamese culture. Another positive aspect of the book is Mia who is a realistic and likable character. She worries about regular teenage things, but also comes to realize that the people in her life are more important than things, cell phone included. This book is suitable for younger readers because the story is told from a teen’s point of view. Although the story contains some adult issues, they are adjusted to fit the maturity level of a younger audience.

Other books by Thanhhá Lai