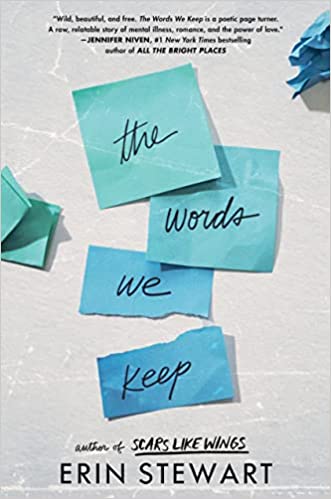 It’s been three months since Lily found her older sister, Alice, bleeding from her wrists on the bathroom floor. Now, with her father having drained his bank account for Alice’s mental treatment program, Lily knows she is not allowed to be a burden to her family. She’s told no one about her panic attacks, or how she impulsively picks the skin on her stomach until it bleeds, sometimes even in her sleep. She constantly wonders to herself, “What if you’re going crazy? Just like [Alice]. What if . . .you’re already gone?” Still, Lily knows she cannot let any of this out. She needs to keep her eyes on the prize – that being a full track scholarship to Berkeley.

Her sister’s return home from Fairview is coupled with a boy named Micah transferring to Lily’s high school. As it turns out, Micah was in treatment with Alice, and he’s also Lily’s new partner for a school art project. The two embark on a project that involves leaving poetry in unexpected places throughout the school. The two maintain their anonymity, gaining the title “the guerilla poets of Ridgeline High.” Lily knows Micah can assist her in finding a way to help her sister. However, Lily also finds that she needs Micah to help her, because the words she’s kept inside for too long are beginning to break through.

Told from Lily’s perspective The Words We Keep is a vivid and gripping story about the effect depression and anxiety can have. The reader feels the push and pull of Lily knowing she needs help but wanting to be strong for her family. The poetry she writes communicates this struggle very well. The highlight on mental illness and self-harm is unflinching, and while at times difficult to read, the narrative handles the difficult subject matter beautifully. Occasionally the chapters end by showing the reader Lily’s Google searches and her word-a-day calendar entries, which allow for deeper glimpses into her psyche. Other chapters end with comments on the high school’s student message board, offering insights into how other students perceive Lily and Micah’s poetry project.

Lily and Micah’s tentative bond and eventual romance is developed well. Micah’s mysterious nature and affinity for the characters of Winnie the Pooh intrigue Lily, and she muses that he might be able “to understand [her struggles]. Maybe he’s the only one who could.” The strained relationship between Lily and Alice is also very important to the narrative. The sisters are both suffering, but unable to console each other because they are holding their struggles back for the sake of the other. Through their relationship, the importance of openness with those close to us during trying times is emphasized.

The major characters in The Words We Keep are largely well-developed and likable, but those outside of the main cast are too numerous and one-dimensional. For example, a bully named Damon is at points unrealistically cruel to Micah. Damon goes as far as giving Micah a bottle of aspirin with a note suggesting that he kill himself, which Micah just shrugs off. Other characters, like Lily’s best friend and her stepmother, provide little substance to the narrative and seem to leave and reenter the story at random periods with little impact, leaving the reader to wonder why they were included at all.

The flaws of The Words We Keep ultimately do little to detract from the impact of the story. Readers will be able to connect with Lily and will want to see her story to its finish. While not for the faint of heart, this is an important novel that explores the pain of suffering in silence, and how to overcome the fear of letting it out and asking for help. Readers will learn that many people around them may be fighting inner demons, and that compassion and openness about one’s own struggles is imperative. Readers who want to explore mental health through fiction should add Paper Girl by Cindy R. Wilson and Page by Paige by Laura Lee Gulledge to their reading list.