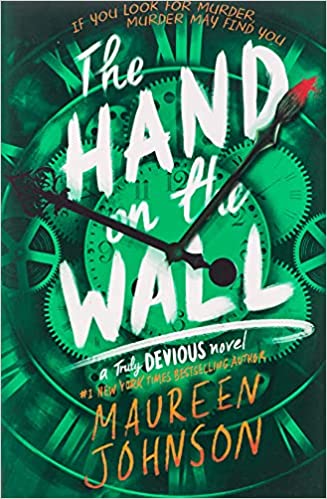 “Stevie would sooner have dropped into the molten core of an erupting volcano more willingly than she would tell someone she was not okay.” –The Hand on the Wall

The Hand on the Wall

Ellingham Academy must be cursed. Three people are now dead. One, a victim of either a prank gone wrong or a murder. Another, dead by misadventure. And now, an accident in Burlington has claimed another life. All three in the wrong place at the wrong time. All at the exact moment of Stevie’s greatest triumph. She knows who Truly Devious is. She’s solved it. The greatest case of the century.

At least, she thinks she has. With this latest tragedy, it’s hard to concentrate on the past. Not only has someone died in town, but David disappeared of his own free will and is up to something. Stevie is sure that somehow—somehow—all these things connect. The three deaths in the present. The deaths in the past. The missing Alice Ellingham and the missing David Eastman. Somewhere in this place of riddles and puzzles, there must be answers.

Then, another accident occurs as a massive storm heads toward Vermont. This is too much for the parents and administrators. Ellingham Academy is evacuated. Obviously, it’s time for Stevie to do something stupid. It’s time to stay on the mountain and face the storm—and a murderer.

The final book in the Truly Devious Series continues the fast-paced intriguing story that solves both the Ellingham’s kidnapping and the murders at the Ellingham Academy. Stevie is relentless in her desire to solve both mysteries and in the end, she is able to tie up all of the events in a satisfying manner. Even though the story ends in the typical detective story confrontation with all of the suspects together, the conclusion still has several surprises.

In addition to solving the mysteries, several of Stevie’s friends are able to find evidence of Senator Edward King’s corrupt behavior and come up with an ethical way to stop the senator from running for president. While his son, David, plays a part in King’s demise, David’s erratic behavior throughout the series makes him an unlikeable character who is difficult to relate to. While David had a difficult childhood, his bad behavior is never fully explained. And even though he treats Stevie with contempt and cruelty, in the end, she forgives him in order to give her a happy-ever-after ending.

The Truly Devious Series is highly entertaining and will keep mystery-loving readers on the edge of their seats. Even though the story revolves around high school students, the content has some gory details, some steamy scenes, and mature content. Readers who are ready for more mature mysteries should grab a copy of The Forest of Stolen Girls by June Hur or I Hunt Killers by Barry Lyga.

“Stevie would sooner have dropped into the molten core of an erupting volcano more willingly than she would tell someone she was not okay.” –The Hand on the Wall