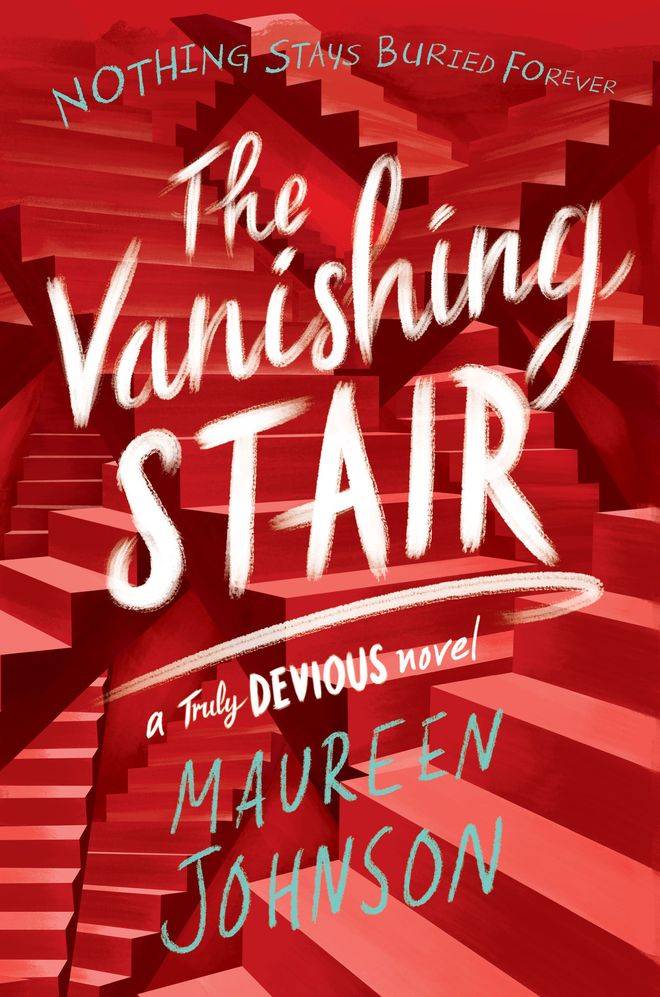 “What do you do when the devil turns up in your living room and offers you everything you want?” Stevie. –The Vanishing Stairs

The Truly Devious case—an unsolved kidnapping and triple murder that rocked Ellingham Academy in 1936—has consumed Stevie for years. It’s the very reason she came to the academy. But then her classmate is murdered, and her parents quickly pull her out of school. For her safety, they say, she must move past this obsession with crime.

Stevie’s willing to do anything to get back to Ellingham, be back with her friends, and solve the Truly Devious case. Even if it means making a deal with the despicable Senator Edward King. And when Stevie finally returns, she also returns to David: the guy she kissed and the guy who lied about his identity—Edward King’s son.

But larger issues are at play. Where did the murderer hide? What’s the meaning of the riddle Albert Ellingham left behind? And what, exactly, is at stake in the Truly Devious affair? The Ellingham case isn’t just a piece of history—it’s a live wire into the present.

The Vanishing Stairs will keep readers interested as new information is revealed both in Stevie’s personal life and in the Ellingham case she is investigating. Stevie is a sympathetic character, who struggles with panic attacks, isn’t always sure how to interact with others, and is curious enough to dig into the lives of the past. Now that one student has died and one student has disappeared, Stevie is more focused on finding out why Ellingham Academy seems to court danger.

While readers learn some information about the kidnapping of Ellingham’s wife and daughter, they also get a firsthand look into the events of 1936 as the book goes from past to present. Stevie’s investigation is able to shed light on some of the events in the kidnapping, but the crime also unfolds from several different characters’ perspectives which allows the reader to understand all aspects of the events. The crime is more complicated—and has more secrets—than expected.

The second installment in the Truly Devious Series begins right where the first one left off. Despite this, the story quickly and excellently explains the main events and important characters from the previous book. However, in order for readers to have an emotional connection to the characters, the series should be read in order.

The Vanishing Stairs is a fast-paced mystery that readers will not be able to put down. Both the interesting characters and the twisty mystery make this a perfect book to wrap up in a blanket and enjoy. However, be warned The Vanishing Stairs does not downplay violence, or the lengths people will go to hide their secrets.

“What do you do when the devil turns up in your living room and offers you everything you want?” Stevie. –The Vanishing Stairs