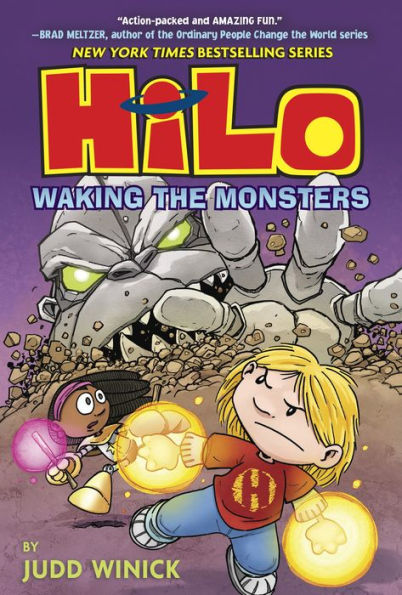 “I bet Batgirl never had to run through a tunnel of poop,” Gina. –Waking the Monsters

Mega robot monsters are popping up from the ground, and they’re too big for Hilo to battle on his own. Luckily, Gina can use her magic to help fight the battle. But the closer Hilo and Gina get to the secret behind the monsters, the closer they get to the secret of Hilo’s past. Do they really want to know what happened in the past?

Gina needs to help Hilo, but that means missing cheerleading practice and keeping her activities hidden from her mother. D.J. and Izzy are determined to keep their two friends safe, but every time a monster is powered down another one appears. With all of the unusual events, Hilo is now on the military’s radar. Can Hilo avoid being captured by the army? Is there any way that Hilo and his friend can stop the monster invasion?

The fourth installment of the Hilo Series has the same characters, but a host of new mechanical monsters that need to be defeated. Unlike the previous books, Waking the Monsters focuses on battle scenes. It takes Hilo and all of his friends working together to stop the creatures. Gina is allowed to shine by using her magical ability to help Hilo. Gina’s excitement at being Hilo’s “sidekick” brings humor to the fighting. During the battles, no one is seriously injured and the mechanical monsters are powered down instead of destroyed.

Hilo’s lost memory, the long battles, and the military joining the battle give Waking the Monsters a slightly darker tone than the previous books. However, Hilo’s desire to help others in creative ways will leave readers with a smile. The story has some humor based on farting and butts. For example, Izzy makes an owl that “farts roses” and she shows her friends how it works. Izzy also makes a chicken that speaks Portuguese and “when she gets mad, her butt falls off.”

Brightly colored illustrations will capture readers’ attention, but readers will want to keep turning the pages because of the engaging story and the likable characters. The detailed illustrations show exaggerated facial expressions which will help readers understand the characters’ changing emotions.  For maximum enjoyment, the stories should be read in order. Even though the first chapter recaps the events in the previous books, the story’s plots build on each other.

Readers will be endlessly curious about Hilo’s forgotten memory. The action-packed scenes, the friendships, and the mystery will keep readers turning the pages to the very end. If you’re looking for a story full of action and humor, the Hilo Series is a perfect choice.

“I bet Batgirl never had to run through a tunnel of poop,” Gina. –Waking the Monsters