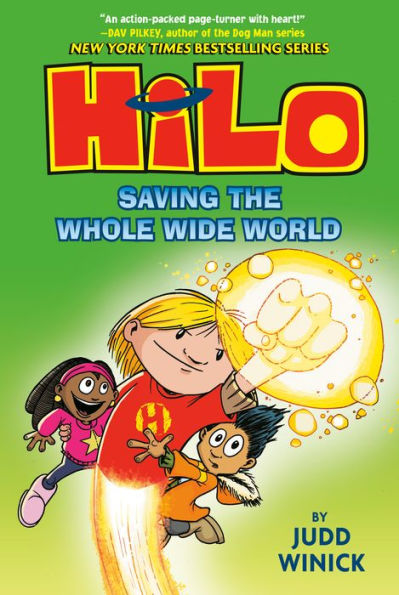 “I can either go home and practice piano or stay here and help save the world. I’m totally staying here,” Gina –Saving the Whole World

Hilo doesn’t remember much about his past, but that’s not stopping him from settling into life on earth. Hilo has discovered bowling, knock-knock jokes, and some good friends. Strange portals begin opening up all over town, and strange creatures are coming through them. Hilo has a plan to send the giant mutant chickens, Viking hippo, and the millions of killer vegetables back to their homeworld. Can Hilo, D.J. and Gina send these creatures back to their worlds before they destroy the earth?

Saving the Whole World digs deeper into Hilo and his friends’ backgrounds as well as introduces a sorceress martial-arts cat named Polly. In addition to being a lot of fun, the ferocious Polly jumps into every battle. D.J.’s family also plays a positive role in the story. Readers will enjoy the hilarious awkward parental interactions. Readers will laugh out loud when D.J.’s mom finds monsters in her house and yells, “Monsters are in my kitchen! There’s a talking cat! And Hilo can fly! I need an explanation! Now!”

Hilo isn’t just a fun story about a super-strong robot boy. Saving the Whole World hits on topics such as family, friends, and fitting in. Several times Hilo reinforces the idea that “Trying to find stuff out is the best part of not knowing something.” Without sounding like a school lesson, Saving the Whole World introduces new vocabulary through Hilo’s speech. For example, Hilo says “Y’see, I lured Razorwark into this limbo. Lured. Isn’t it a great word? Lured: verb, past tense. To tempt a person or animal to do something or go somewhere.”

Brightly colored illustrations will capture readers’ attention, but readers will want to keep turning the pages because of the engaging story and the likable characters. The detailed illustrations show exaggerated facial expressions which will help readers understand the characters changing emotions.   For maximum enjoyment, the stories should be read in order. Even though, the first chapter recaps the events in the previous books, the stories’ plots build on each other.

The book ends in a cliff-hanger that will have readers reaching for the next book, The Great Big Boom. Viking hippos, a magical warrior cat, and attacking vegetables combine to make a wonderful story that all ages will enjoy. If you’re looking for a story full of action and humor, Hilo is a perfect choice.

“I can either go home and practice piano or stay here and help save the world. I’m totally staying here,” Gina –Saving the Whole World