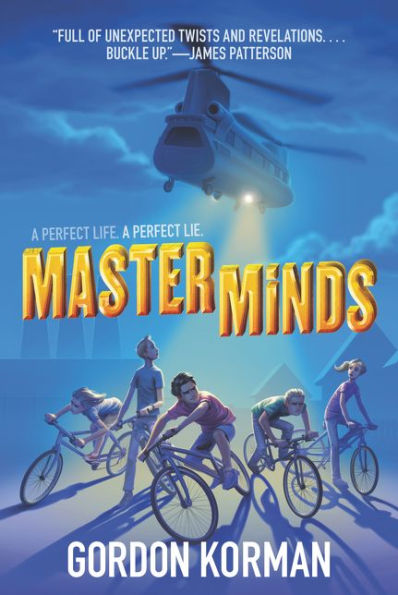 “One minute you think you’ve got your life figured out. The next it shatters like a glass bowl hitting a stone patio. My father is the enemy,” Eli –Masterminds

Eli Frieden has never left Serenity, New Mexico…why would he ever want to? Then one day, he bikes to the edge of the city limits and something so crazy and unexpected happens, it changes everything.

Eli convinces his friends to help him investigate further, and soon it becomes clear that nothing is as it seems in Serenity. The clues mount to reveal a shocking discovery, connecting their ideal, crime-free community to some of the greatest criminal masterminds ever known. The kids realize they can trust no one — least of all their own parents.

Masterminds has a slow start as it introduces the many characters and the town of Serenity. However, the story also has some heart-stopping moments, which all revolve around the kids trying to figure out the secret that all of the adults have been hiding. Many of the story’s events and explanations are far-fetched. Because of the unbelievable nature of the plot, readers will have to suspend their disbelief in order to enjoy the story.

Readers who enjoy conspiracy theories and mysteries will enjoy Masterminds. The story has a unique premise and will leave readers debating the scientific question of nature vs. nurture. While not all of the events are believable, the suspense and mystery make Masterminds an interesting story. The conclusion doesn’t wrap up all of the story’s threads, but leaves many unanswered questions which will be explored in the next book, Criminal Destiny. While Masterminds has some slow moments, Criminal Destiny picks up the pace in an exciting sequel. If you’re a mystery fan that would prefer a more logical mystery, the Theodore Boone Series by John Grisham would be a better choice.

“One minute you think you’ve got your life figured out. The next it shatters like a glass bowl hitting a stone patio. My father is the enemy,” Eli –Masterminds