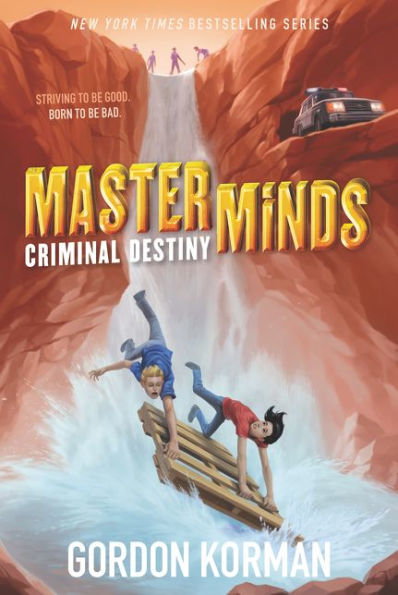 “How’d you like to discover that your while life is a lie, the people you thought were your parents are mad scientists, and you only exist to be part of some experiment?” Hector. –Criminal Destiny

The clones of project Osiris are now free – but they’re being hunted. After their narrow escape from their “perfect” hometown, Eli, Tori, Amber, and Malik are finally in the real world and are determined to expose the leaders of the other world, Serenity. They decide to track down Tamara Dunleavy, the mysterious billionaire and founder of Project Osiris. Evading capture by breaking laws and sneaking into houses, hotels, buses, and cars—are they becoming the criminals they were destined to be?

What they learn will change everything and lead them straight back into the Plastic Works and the heart of the experiment in order to uncover the deadly criminals they’re cloned from—and find evidence that will convince the outside world to believe the truth. But the outside world isn’t exactly what they expected. Strangers aren’t just unfriendly, they’re dangerous. The wrong move could send them right back into the arms of Dr. Hammerstrom and leave them trapped in Serenity for good.

The story revolves around five characters—Eli, Malik, Hector, Tori, and Amber—and each chapter changes between these characters’ points of view. This allows the reader to understand each character’s thought process, which helps build their character. Each person struggles with the knowledge of being cloned from a criminal, but each one reacts to it differently and sometimes in surprising ways.

The story Criminal Intent has non-stop action as the kids discover how the real world works. As the kids try to navigate the real world, their misunderstandings lead to some hilarious comments. The kids truly believe that they need to break Rackoff, one of the criminals a kid is cloned from, out of prison in order to have a future. His escape is “a ticket for eleven clones to be able to prove who they are, and what’s been done to them. And maybe, just maybe, have a future.” Because of this belief, the kids are willing to commit crimes in exchange for his help.

While the conclusion is somewhat far-fetched, it also has several surprises and ends with a cliff-hanger. The kids are so busy evading the Purples, the police, and other people, that they do not have time to learn anything about Project Osiris. Unfortunately, the kids’ only plan is to find help from one of the criminals that they were cloned from. While Criminal Intent has humor and action, the kids have no real idea how they are going to have a future separate from the scientists from Project Osiris, which includes their parents. Instead of solving any problems, this action-packed story sets up an exciting third book, Payback.

“How’d you like to discover that your while life is a lie, the people you thought were your parents are mad scientists, and you only exist to be part of some experiment?” Hector. –Criminal Destiny