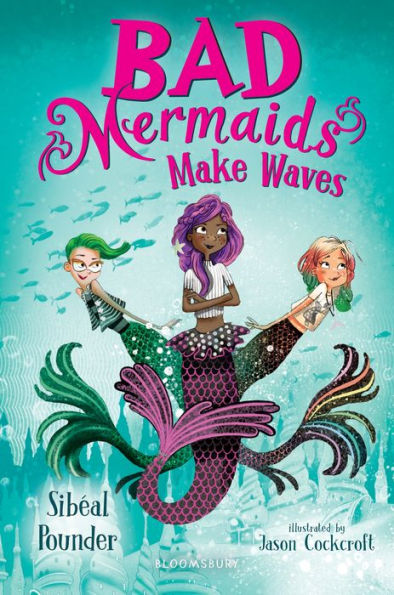 Zelda said, “Proof that you should always be free to wear whatever you want, even if what you want to wear is glittering shrimp.” —Bad Mermaids Make Waves

Beattie, Mimi, and Zelda planned to spend the summer on land with temporary legs, but their trip is cut short when they receive a message ordering them to return home. The queen of the Hidden Lagoon, Arabella Cod, has been fishnapped. It’s up to the three friends to figure out what has happened to Arabella. When they return to the Hidden Lagoon, they discover that some seriously bad mermaids have taken over. With the help of a talking seahorse, the three go on a dangerous journey to discover who has fishnapped Arabella. Will the three be able to avoid the bad mermaids and chasing piranhas? Can they discover who the true villain is?

Readers looking for a fast-paced and silly mermaid mystery will be drawn to Bad Mermaids Make Waves because of the beautiful cover and the fun black-and-white illustrations throughout the story. The illustrations bring the magical mermaid world to life and help readers visualize the many crazily outfitted characters.

As Beattie, Mimi, and Zelda swim through the mermaid kingdom looking for clues, they interview those who may have had a hand in Arabella Cod’s disappearance. The mystery solving is more silly than serious and the three spend much of their time being chased. Bad Mermaids Make Waves will satisfy readers who like riddles, puns, and seriously silly fun.

The three main characters and a talking sea-horse, Steve, interact in hilarious ways. Another added bonus is the news-like articles from Clamzine and The Scribbled Squid that are dispersed throughout the story. The Scribbled Squid writes, “gossip and lies and things you should definitely buy,” while Clamzine gives snapshots of important characters in a fun way.

Zelda said, “Proof that you should always be free to wear whatever you want, even if what you want to wear is glittering shrimp.” —Bad Mermaids Make Waves