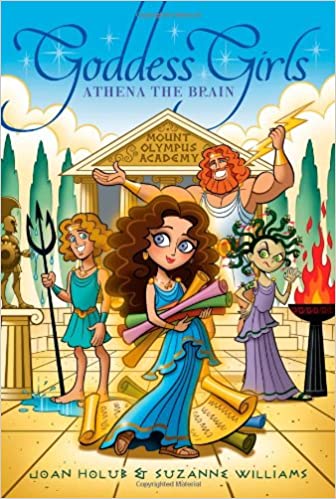 “Athena was beginning to think supernatural powers were nothing but a big pain. Every little mistake the gods and goddesses made could cause terrible trouble. And the whole world was watching their every move.” –Athena the Brain

Athena has always been above average. She’s never quite fit in at Triton Junior High, but who would’ve guessed that Athena is actually a goddess? Principal Zeus’s daughter, to be exact. When she’s summoned to Mount Olympus Academy, Athena thinks she might actually fit in for the first time in her life. But in some ways, school on Mount Olympus is not that different from down on earth. It doesn’t help that Althea is going to have to deal with the baddest mean girl in history—Medusa!

In the Goddess Girls Series, readers will follow the ins and outs of divine social life at Mount Olympus Academy, where the most privileged godboys and goddessgirls in the Greek pantheon hone their mythical skills including “manipulation, disasters, and quick saves.”

The students at Mount Olympus Academy act like typical junior high students, but they have powers that add drama to the story. As part of her course work, Athena must create a quest for Odysseus. This allows the book to explore the story of Helen, who ran away with Paris and started the Trojan War. However, the rules between the human world and Olympus are unclear to Athena. For example, because Athena just learned that she was a goddess, she accidently makes mistakes, such as falling asleep and dropping Odysseus in the sea where he almost drowns. While none of the events are particularly believable, young readers will enjoy learning about Mount Olympus Academy and the Greek gods. However, in order to create more drama and conflict, the story doesn’t always stick to the facts from the original Greek myths.

Athena and the other students also have a contest to see who can make the best inventions. Most of the inventions are silly, such as Lucky-in-Love Lip Balm that makes everyone fall in love with the wearer. When Poseidon wins the contest, he gets to determine his award. He says, “First off, I’d like mortals to name a chewing gum after my trident, so no one will ever call it a pitchfork again. And I’d like to be Earth’s official water park designer.” The book’s humorous tone will appeal to many readers.

The quickly changing topics, the large cast of characters, and the reference to the Odyssey and the Trojan War may be confusing for some readers. However, Athena the Brain is full of silly events, crushes, and new friendships. While the story has no educational value and teaches no life lessons, young readers will quickly be caught up in the school’s drama. Athena’s bully, Medusa, is a predictable villain that readers will love to hate. While the conclusion is a bit predictable, readers will be happy to see the mean girl Medusa meet her downfall.

If you’re looking for a fun series that will engage young readers, the Goddess Girls Series hits the mark. With 28 books in the series, it will keep readers entertained for a long time. Athena the Brain is perfect for readers who are ready to leave illustrated chapter books behind, but not yet ready to jump into the Percy Jackson Series. If you love stories that revolve around mythology, you should also read the Thunder Girls Series by Joan Holub & Suzanne Williams.

“Athena was beginning to think supernatural powers were nothing but a big pain. Every little mistake the gods and goddesses made could cause terrible trouble. And the whole world was watching their every move.” –Athena the Brain