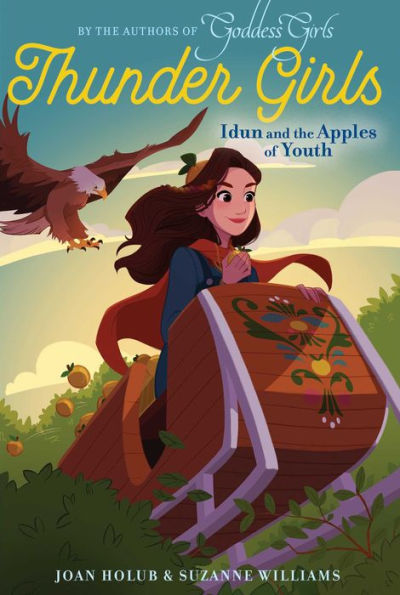 “Speaking up for yourself isn’t necessarily selfish,” Freya. –Idun and the Apples of Youth

Idun and the Apples of Youth

Twelve-year-old Idun is confident that she can take care of the apples of youth–the magical and delicious golden apples that keep all of Asgard Academy’s gods and goddesses healthy and young. But when it comes to sharing her thoughts, Idun feels insecure. Instead, Idun keeps her feelings hidden inside.

When Loki makes a deal with a giant disguised as an eagle, Idun must figure out how to save herself and her magical orchards. How can Idun save the apples of youth so the gods and goddesses don’t age?

Readers will relate to Idun’s conflict: she isn’t sure when it’s best to share her thoughts or keep them secret. Instead of telling others what she thinks, she often stays silent, which causes her to feel hurt and unhappy. Although the conflict is relatable, the story’s plot is choppy and follows the same format as the previous book. Predictably, Loki is “a worm in a rotten apple” and causes the disappearance of the apples of youth. The only surprise is that any goddessgirl would trust Loki not to betray her.

Idun and the Apples of Youth is full of fun apple puns, surprising shapeshifting, and a crush-worthy boy-god. When the apples of youth disappear, everyone begins to age, which brings in some silly situations that will make readers smile. Through her experiences, Idun learns that “speaking up for yourself isn’t necessarily selfish.”

The Thunder Girls series does not need to be read in order; however, readers who are unfamiliar with Norse mythology will want to read the glossary first. The easy-to-read story will keep younger readers entertained as a new villain flies into the picture and traps Idun. Even when Idun is in a perilous situation, she doesn’t sit around waiting for someone to save her.

Readers interested in mythology but who aren’t ready to tackle the Percy Jackson series will enjoy the Thunder Girls series. Interesting characters, fashion, and just the right amount of blush-worthy scenes will keep readers interested until the very end.

“Speaking up for yourself isn’t necessarily selfish,” Freya. –Idun and the Apples of Youth