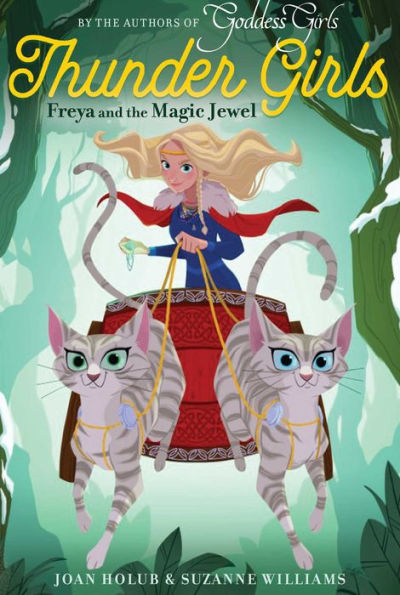 “I don’t know everything,” Mimir admitted. “But what I don’t know, I can usually find in a book.” –Freya and the Magic Jewel

Freya and the Magic Jewel

When eleven-year-old Freya hears a Doomsday prophecy from her magical jewel, she isn’t sure what to make of it. Mere seconds after the prediction, she receives a mysterious invitation to Asgard Academy from the powerful Odin, who commands her to “bring her magic” to Asgard.

With encouragement from her twin, Frey, Freya reluctantly heads out on the new adventure. Freya’s first challenge begins before she even steps foot in Asgard. While trying to navigate the treacherous Bifrost Bridge, she drops her magical jewel off the bridge, and a sneaky pair of dwarves take her jewel down to the world of Midgard!

Without that jewel, Freya thinks she is powerless. But with the help of her pod-mates at Asgard, Freya discovers a world that is bigger and more mysterious than she ever imagined! There, she learns the true terror of Ragnarok, the doomsday that her jewel warned her about, and what it could mean for Asgard Academy if she and her new friends, the Thunder Girls, don’t stop it!

Fans of Goddess Girls will enjoy this new series, which focuses on Norse Mythology. At first, Freya comes across as shallow because of her intense love of fashion and her assumption that everyone male will find her crush-worthy; she is the goddess of love and beauty after all! On the positive side, Freya has a positive attitude even when times are difficult. In the end, Freya learns that her best ability is fostering friendship. Readers will relate to Freya, who wonders if she is “in-like” with someone, and worries about hurting someone’s feelings if she does not like them in the same way.

Freya soon learns that Mason has a crush on her. In order to win her heart, he promises to “rebuild Asgard’s wall to protect her, if only she will give me her heart in return, plus the sun and the moon.” Freya doesn’t want to make the promise, but she knows the Asguard’s wall must be rebuilt. She reluctantly agrees because she doesn’t think Mason can succeed at building the wall. Although this is one of the main plot points, Mason is delegated to the background, so the ending falls flat.

Readers who are unfamiliar with Norse mythology will want to read the glossary first. The story introduces Norse mythology in a kid-friendly way, while still staying true to the original stories. Readers will enjoy the Norse world, Loki’s mischievous pranks, and the fast pace of the story. Although the story lacks depth, the characters are stereotypical, and Freya is not well developed, younger readers will enjoy getting to know Freya and the other Norse god and goddesses.

“I don’t know everything,” Mimir admitted. “But what I don’t know, I can usually find in a book.” –Freya and the Magic Jewel