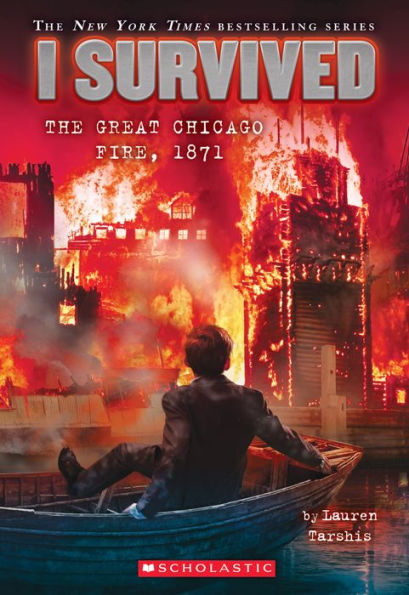 “But it was hard to have hope when all Oscar could see in any direction was smoldering ruins. Hundreds of people were dead, and four miles of the city had burned to the ground.” –The Great Chicago Fire, 1891

I Survived the Great Chicago Fire, 1891

Oscar Starling never wanted to come to Chicago. But then Oscar finds himself not just in the heart of the big city, but in the middle of a terrible fire! No one knows how it began, but one thing is clear: Chicago is a giant powder keg about to explode.

An army of firemen is trying to help, but this fire is a ferocious beast that wants to devour everything in its path – including Oscar! Will Oscar survive one of the most famous and devastating fires in history?

While the story’s focus is the Great Chicago Fire, Oscar is also dealing with his father’s death and his mother’s new marriage. Even though Oscar’s father has died, Oscar thinks about his father often, which helps him be brave during the fire. Oscar’s father gives the story added depth and interest. Because of his father’s stories, Oscar is able to help two parentless kids and stand up to a street gang leader.

The Great Chicago Fire, 1891 jumps straight into the action, which continues throughout the story. The compelling story focuses on the fire, but also includes information about homeless street children. The two subplots are expertly woven together to create an interesting, suspenseful story that readers will devour. Full of surprising twists and unexpected danger, The Great Chicago Fire, 1891 brings history to life.

The story is told from Oscar’s point of view, which allows the reader to understand the danger and confusion associated with being surrounded by the fire. One of the best aspects of the story is Oscar’s changing opinion of a street kid named Jennie. When Jennie helps a gang of boys steal from Oscar, he thinks she is a terrible criminal. But his opinion of Jennie changes when he learns about her circumstances. In the end, the two kids work together to survive the fire.

The story is accessible to all readers because Tarshis uses short paragraphs and simple sentences. Realistic black and white illustrations are scattered throughout the story and will help readers visualize the events. While the story weaves interesting facts throughout, the book ends with more facts about the Chicago fire. The historical information about the cause of the fire would be an excellent opportunity for parents to discuss journalists reporting “fake news” and how gossip can “harden into established fact.”

Readers who enjoy history and fast action stories will enjoy The Great Chicago Fire, 1891. If you’re looking for more historical fiction, Survival Tails by Katrina Charman takes a look at historical events from an animal’s point of view. Both series use engaging stories to teach about history.

“But it was hard to have hope when all Oscar could see in any direction was smoldering ruins. Hundreds of people were dead, and four miles of the city had burned to the ground.” –The Great Chicago Fire, 1891