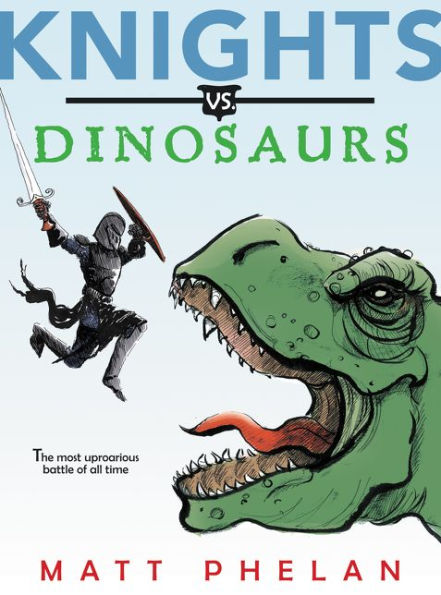 “Might should be used only in the service of the greater good,” Erec. —Knights vs. Dinosaurs

For the Knights of Camelot, peace has brought boredom. They don’t have much to do, and most have never seen a dragon. During the knightly feast, the knights begin to boast about their heroic deeds. When Sir Erec boasts that he slew forty dragons on his last quest, Merlin decides to teach the knights a lesson and sends them on an adventure.

Four knights and one squire enter a cave and come out during another time. Suddenly, they are surrounded by the most terrible lizards of all: dinosaurs. Will the knights be able to survive the snapping jaws of these gigantic lizards?

Fast-paced, funny, and full of surprises, Knights vs. Dinosaurs blends graphic-style illustrations with a unique adventure. Black-and-white illustrations are scattered throughout the story, and several of the graphic-novel style battles appear over multiple pages. As each knight goes off alone, they encounter different terrible lizards. Seeing each knight’s perception of the different dinosaurs adds interest and humor to the story.

The knights engage in battle after battle, but the story still develops each knight’s unique personality. Sir Hector clearly loves books. Sir Bors believes that, “Might makes right.” The Black Knight is silent and skilled. The characters don’t only clash with the dinosaurs, they also clash with each other. In the end, the knights’ adventures teach them the dangers of boasting and the necessity of working together. The knights discover that each one of them has a specific talent and they need to take advantage of each person’s strengths and work together in order to survive.

For those who like knights, dinosaurs, and battles, Knights vs. Dinosaurs has an entertaining, engaging story that will keep readers turning the page. Younger readers may find some of the vocabulary difficult. In order to create the same feel as medieval times, difficult words such as lummox, smote, peruse, and inscrutable are used. This is the perfect book for reluctant readers who want to fall into a fabulously funny story.

“Might should be used only in the service of the greater good,” Erec. —Knights vs. Dinosaurs