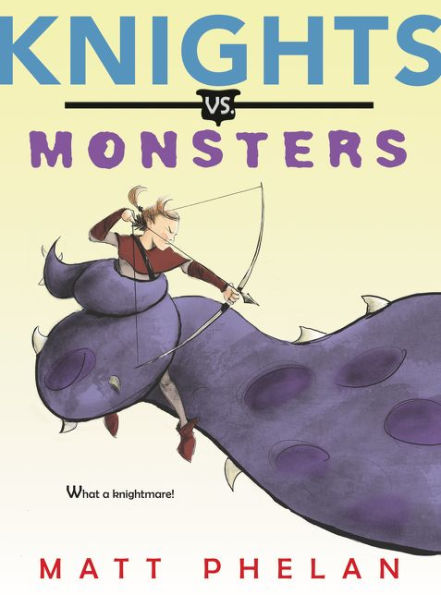 “We are knights. Sanity does not enter into it. We must stop Morgause,” Erec –Knights vs. Monsters

A group of knights has fought dinosaurs, but now they are searching for the holy grail. Sirs Erec, Bors, Hector, the fearsome Black Knight Magdalena, and Mel the archer are all ready for a real adventure. So, when an enchanted ship appears, they do the only thing that makes sense—they board it.

The ship takes them to the Orkney Isles, where Queen Morgause plans their demise. Once the knights are out of the way, she can dethrone King Arthur. With the help of her children, Queen Morgause puts her plan into action. Each night when the sun sets, a mist will bring a hoard of monsters. As the knights face the monsters and try to keep the village safe, they must defeat a vampire, werewolves, ogres, and a host of other strange and terrible creatures.

Like the first book in the series, Knights vs. Dinosaurs blends graphic-style illustrations with a unique adventure. Black-and-white illustrations are scattered throughout the pages, and there are several graphic-novel style battles that are illustrated over multiple pages. The story is fast-paced, gloomy, and full of surprises. However, some of the monsters seem out of place. For example, a vampire appears and bites a woman and Erec then conveniently steps in a sunbeam and disintegrates. Once the vampire disappears, there is no mention of what happens to the people who were bitten. The story arch ends abruptly, leaving the reader to wonder how the scenes fit into the overall story.

The knights engage in battle after battle, but unlike Knights vs. Dinosaurs, the characters do not learn from their experiences. The story ends with an epic battle that brings the villagers, the knights, and most of Queen Morgause’s children together to defeat evil. The introduction of the Scottish mythological creature the nuggle adds interest to the end battle. Knights vs. Dinosaurs should be read first, because it introduces all of the main characters, and understanding the characters’ backgrounds will increase the reader’s enjoyment. Even though Knights vs. Monsters has a darker tone, readers will still enjoy the action-packed scenes and the fight between good and evil. Anyone interested in King Arthur or the battle between good and evil should pick up Knights vs. Monsters; the unique story will not disappoint.

“We are knights. Sanity does not enter into it. We must stop Morgause,” Erec –Knights vs. Monsters