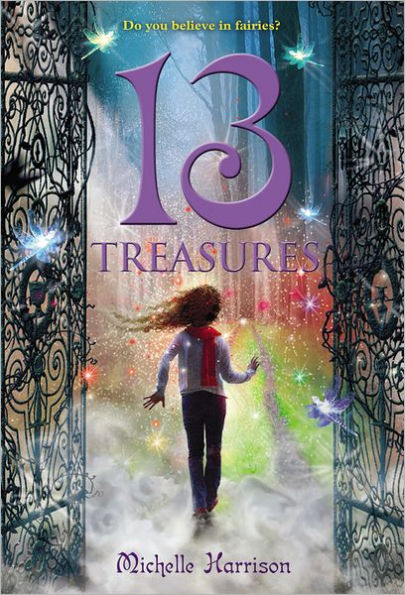 "To do something you're afraid of, especially for the sake of somebody else, is the very definition of courage. . ." —13 Treasures

Tanya can see fairies—evil fairies who want to keep their existence secret. When Tanya writes about the fairies in her diary, they come to punish her. They pinch her, rouse her from her sleep, and cast spells on her. Tanya’s strange behavior can’t be ignored or explained, and her mother isn’t sure what to do. In an effort to get Tanya to behave, her mother sends her to Elvesden Manor, her grandmother’s secluded estate.

In the hopes of learning more about how to protect herself from the fairies, Tanya sneaks into her grandmother’s library. Soon Tanya is mixed up in a fifty-year-old mystery of a missing girl. But as Tanya tries to unravel the mysteries of her second sight, she soon discovers that there is more to the fairy realm that she first believed. And if she is not careful, she may be pulled into the fairy world and never be able to return home.

Right from the start, 13 Treasures creates suspense as the fairies attack Tanya. Tanya struggles to keep the fairies secret (or they will seek revenge) but also explain her strange behavior. When Tanya is sent to her grandmother’s house, no one is particularly glad to see her, except Fabian the care keeper’s son. The tension in the house creates suspense. The evil fairies, the unwelcoming grandmother, and the string of missing children all lead to a creepy mystery. However, Tanya proves to be a compassionate, plucky heroine that befriends a goblin.

13 Treasures is full of fairy lore, strange creatures, and complicated characters who add interest to the story. Younger children will enjoy having a few scares that don’t leave them frightened. Even though the story is written for 8-12-year-olds, the language and the long descriptive passages may be difficult for some children.

"To do something you're afraid of, especially for the sake of somebody else, is the very definition of courage. . ." —13 Treasures