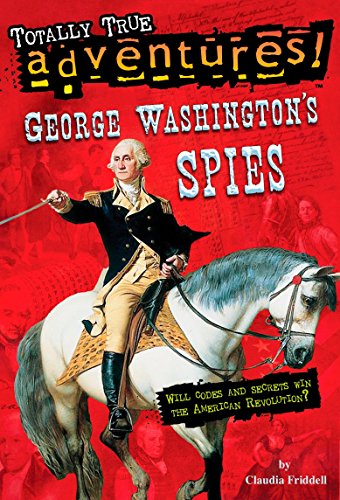 “Washington’s Culper spies didn’t breathe a word of their heroic contributions to winning the war. They had not risked their lives for praise. They had not spied for money. Most of them took their secrets to their graves.” –George Washington’s Spies

Everyone knows George Washington, but do you know his biggest secret? By the end of 1776, the British army had taken over New York City. General George Washington and his army were on the run, but he had not lost hope—he had a plan. With the help of a trusted friend, he created a ring of spies. They used codes, invisible ink, and more to spy on the British and pass along information . . . but could they do it without getting caught?

George Washington’s Spies teaches about the Revolutionary War and introduces some of the men who helped defeat the British. Readers will be fascinated by George Washington’s spies and their close connections to one another. The book introduces two of the most famous men of the Revolutionary War—Nathan Hale and Benedict Arnold. While the story doesn’t dig deep into any one person’s history, it will leave readers wanting to learn more. Readers can learn more about the Revolutionary War by reading the graphic novel series Nathan Hale’s Hazardous Tales by Nathan Hale and Daniel at the Siege of Boston 1776 by Laurie Calkhoven.

Readers who find history boring will still enjoy George Washington’s Spies. The book is good for reluctant readers because it uses short chapters and has large black and white illustrations that appear every 5 to 9 pages. While the book is easy enough for young fluent readers, the content will be interesting to older readers as well. The end of the book has an appendix that includes photographs, bonus content, and links to primary source materials.

George Washington’s Spies makes reading about history fun. The Totally True Adventures Series introduces readers to different historical topics such as The Curse of King Tut’s Mummy, and Babe Ruth and the Baseball Curse. If you’re looking for a book series that entertains as well as teaches, the Totally True Adventures Series has many options to choose from. If you’re a history buff who enjoys learning about early America, then George Washington’s Spies is the perfect book for you.

“Washington’s Culper spies didn’t breathe a word of their heroic contributions to winning the war. They had not risked their lives for praise. They had not spied for money. Most of them took their secrets to their graves.” –George Washington’s Spies