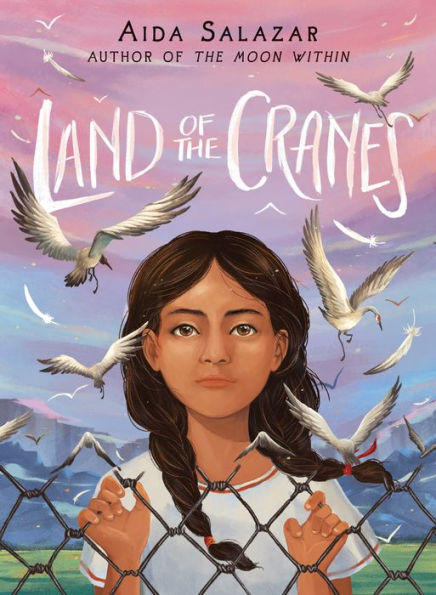 “No matter how we struggle, remember to keep life sweet,” Papi. –Land of the Cranes

Nine-year-old Betita knows she is a crane. Papi has told her the story, from even before her family fled to Los Angeles to seek refuge from cartel wars in Mexico. Long before that, Aztecs came from a place called Aztlan, which is now the Southwest U.S. This place was called the land of the cranes. The Axtecs left Aztlan to establish their great city in the center of the universe -Tenochtitlan, modern-day Mexico City. But it was prophesied that their people would one day return to live among the cranes in their promised land. Papi tells Betita they are cranes that have come home.

Then one day, Betita’s beloved father is arrested by Immigration Customs Enforcement (ICE) and deported to Mexico. Betita and her pregnant mother are left behind, but soon they too are detained and must learn to survive in a family detention camp outside of Los Angeles. Even in cruel and inhumane conditions, Betita finds heart in her own poetry and in the community, she and her mother find in the camp. The voices of her fellow asylum seekers fly above the hatred keeping them caged, but each day threatens to tear them down lower than they ever thought they could be torn. Will Betita and her family ever be whole again?

Land of the Cranes is told from Betita’s point of view. Her voice comes through in the narration and in the poems she writes for her father. She also draws simple illustrations that help convey her emotions. Even though the story is told from a child’s point of view, younger readers may be upset by the harsh treatment and a brief description of sexual abuse.

Written in prose, Land of the Cranes has some beautiful language. However, Spanish words and phrases are scattered throughout the book, which may cause confusion for non-Spanish speakers. In an extended metaphor, Betita refers to her and her family as cranes. Expanding on this metaphor, when she thinks about her mother’s pregnancy Betita talks about the “egg” and the “nest.” One reason Betita is worried about the “egg hatching” is that “Mami has lost / two babies before. / They worry that this one / might get lost too.”

Land of the Cranes explores the “zero tolerance” policy of ICE detaining undocumented immigrants and the harsh condition of the detention centers. One of Salazar’s purposes for writing the book is to show an example of “a larger, tragic, and true story of the criminalization of migration that spans hundreds of years.”

Younger readers may be disturbed by Land of the Cranes because it deals with the difficult topic of immigration and families being torn apart. In addition, readers may have a difficult time understanding some of the language and when Spanish is used, there are not always context clues to help readers understand the words’ meanings. Despite this, Land of the Cranes would be an excellent book to use as a conversation starter. Sensitive readers may want to skip Land of the Cranes and read Efren Divided, which explores the same topics but uses a more child-friendly manner.

“No matter how we struggle, remember to keep life sweet,” Papi. –Land of the Cranes