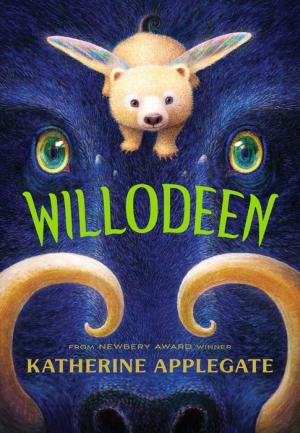 “In my experience,” Mae said, casting a fond glance at Birdie, “it’s best for all concerned if you simply go ahead and be what you are meant to be. Saves valuable time.” –Willodeen

Eleven-year-old Willodeen adores creatures of all kinds, but her favorites are the most unlovable beasts in the land; strange beasts known as “screechers.” The villagers of Perchance call them pests– even monsters– but Willodeen believes the animals serve a vital role in the complicated web of nature.
Lately, though, nature has seemed angry indeed. Perchance has been cursed with fires and mudslides, droughts and fevers, and even the annual migration of hummingbears, a source of local pride and income, has dwindled. For as long as anyone can remember, the tiny animals have overwintered in shimmering bubble nests perched atop blue willow trees, drawing tourists from far and wide. This year, however, not a single hummingbear has returned to Perchance, and no one knows why.

When a handmade birthday gift brings unexpected magic to Willodeen and her new friend, Connor, she’s determined to speak up for the animals she loves, and perhaps even uncover the answer to the mystery of the missing hummingbears.

Willodeen is a wonderfully relatable character who feels as if she’s odd and unlovable because she would rather spend time in nature than with people. Like many middle school readers, Willodeen is often self-conscious and struggles to find her voice. Many people make fun of Willodeen’s love of screechers because they don’t understand why she loves the ugly, smelly creatures. However, when Willodeen meets Connor, they connect over their love of all creatures. In the end, Willodeen becomes the heroine of the story when she uses her power of scientific observation to solve the town’s problem, saving the screechers in the process.

Through Willodeen’s experiences, readers will learn about the importance of community. When the town is threatened by fire, everyone joins in to help put the fire out. The theme is developed further when Willodeen and Connor go to the city council meetings—where both Willodeen and Connor find the bravery to speak up for the detested screechers. Readers will love how Mae, Birdie, and Connor’s father stand up for Willodeen and encourage her to “be what you are meant to be.” Even though Willodeen is different than others, the story shows that she has value and can contribute to her community in her own unique way.

Willodeen is also a story about caring for all nature—even the animals that aren’t adorably cute like the hummingbears. The story shows how all of nature is interconnected and how each animal has an important role in the ecosystem. Readers will love discovering how the screechers and the hummingbears are interconnected. In the end, the town learns to appreciate the screechers. And when tourists “complained about the horrible beasts stinking up the village, we learned to simply shrug and say, ‘when screechers were invented, Mother Nature made them scented.’”

Appplegate creates another beautiful story that advanced readers and middle school readers will love. The short chapters, loveable characters, and a bit of magic will captivate readers and leave them contemplating ways they can use their voice to impact their community.

“In my experience,” Mae said, casting a fond glance at Birdie, “it’s best for all concerned if you simply go ahead and be what you are meant to be. Saves valuable time.” –Willodeen