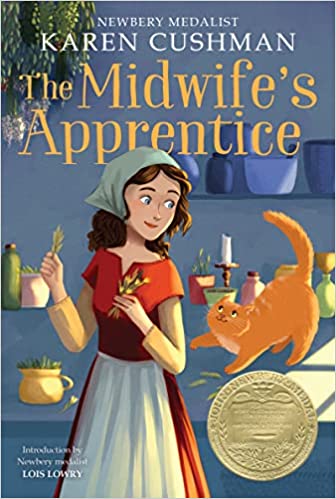 “Everybody is somebody and so are you,” Alyce. –The Midwife’s Apprentice

A girl known only as Beetle has no family, no home, and no future until she meets Jane the Midwife and becomes her apprentice. As she helps short-tempered Jane deliver babies, Beetle—who renames herself Alyce—gains knowledge, confidence, and the courage to want something in life for the first time.

At first, Alyce thinks she is unimportant and unworthy of kindness. The midwife often reminds Alyce that she is a nimwit, a lackwit, and has no brains. At first, Alyce believes the midwife’s assessment of her and silently takes the midwife’s abuse. Slowly, with the help of fate, Alyce begins to realize that she is worthy and deserves a real name. However, Alyce’s growing confidence is often overcome by fear. And when Alyce faces failure, she runs away from the midwife and leaves the village. While she is gone, she learns to value herself and to ask herself what she really wants.

As the title implies, the story revolves around a midwife who often delivers babies. While none of the births are described in detail, there are some long descriptions of the herbs and potions that are used during birth. In addition, the story discusses some of the medieval superstitions revolving around birth. Because Alyce is the midwife’s apprentice, she accompanies the midwife and learns many skills through observation. Due to this, there is little action (after all, babies take time and patience to deliver.)

While Alyce isn’t necessarily a relatable character, readers will still sympathize with her plight and understand her fear of failure. Originally, Alyce allows her fear and uncertainty to paralyze her, but she eventually learns that failure is part of life and she must “try and risk and fail and try again and not give up.” Even though Alyce is frightened, she is brave when a boy almost drowns and she saves him, and when a woman is struggling to birth her child, Alyce uses her knowledge to safely bring the child into the world. These events help Alyce learn that “everyone is somebody” and everyone deserves to be treated with kindness. It is Alyce’s compassion for those in need that make her a truly remarkable character.

The Midwife’s Apprentice received the Newberry Medalist award. It has universal appeal because Alyce wants what every human wants—to be loved. Through Alyce’s experiences, readers will step back into medieval times and learn about their superstitions, customs, and the importance of midwives. The rich period language, advanced vocabulary, and slow pace make The Midwife’s Apprentice best for strong readers who are interested in the topic. Readers who stick with the story will fall in love with Alyce and her cat, and the story’s conclusion will leave readers with a warm glow and encourage them to never give up.

“Everybody is somebody and so are you,” Alyce. –The Midwife’s Apprentice