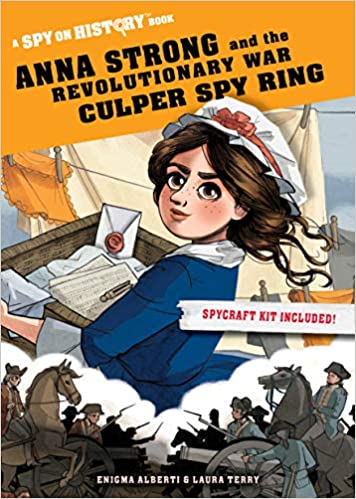 “The French joining the war could mean the fledgling American nation had a shot at winning. . . but if the British crushed the first bit of help the French sent, there was no guarantee the French would ever send more aid.” –Anna Strong and the Revolutionary War Culper Spy Ring

Travel back in time to the American Revolution in this thrilling third book of the Spy on History series. Discover the secret Culper Ring, a network of American spies fighting against the British redcoats. Meet historical figures like George Washington and the soon-to-be-infamous Benedict Arnold. Also meet Anna Strong, an unsung heroine who found ingenious ways to communicate top-secret messages to her fellow spies—helping to free the American colonies from British rule.

Your mission: Decode Anna Strong’s hidden message and discover the secret assignment she undertook for the Culper Ring. There are clues embedded in the book’s text and illustrations, plus spy craft materials, including a cipher wheel in an envelope at the beginning of the book.

Anna Strong and the Revolutionary War Culper Spy Ring allows readers to step back into history and play the part of a Culper spy. The story focuses on Anna and her role as a spy during the Revolutionary War. Even though Anna was often fearful, her bravery allowed George Washington to receive important wartime intelligence that was critical in winning the war. Focusing on Anna allows the reader to see how the war affected men, women, and children.

Anna’s story is fast-paced, full of suspense, and jam-packed with historical information. In addition, the book’s format is visually appealing. Every page has a graphic element, including pictures that are drawn in black, white, and red. Plus, most of the pages have a quote set apart from the other text. These quotes are printed in large fonts and help break up the text. The graphic elements are essential because hidden in the pictures and text are clues and codes. Readers will use a cipher wheel, a pigpen code, and other methods to decipher Anna’s letter to Caleb Brewster, another spy.

Readers will enjoy using the spy tools and finding clues throughout the story. However, the lack of direction makes this task difficult. The first page of the book has a map of the Culper Spy Ring. The top of the map has a coded question that is easy to miss. Without the essential question, the clues are just a collection of random words. Parents may want to read the answer key that appears at the end of the book so they can assist young readers in finding and understanding the clues.

Anna Strong and the Revolutionary War Culper Spy Ring will appeal to readers who love ciphers, history, spies, and mystery. Plus, it gives recognition to many of the spies who helped win the American Revolution. The well-written story will keep readers’ attention and the hidden clues will make them feel like they are a part of history. Readers who want to learn more about women’s role in the Revolutionary War should also read Susanna’s Midnight Ride by Libby Carty McNamee. If you’re looking for more historical facts about the Culper Spies, George Washington’s Spies by Claudia Friddell will give you the inside scoop.

“The French joining the war could mean the fledgling American nation had a shot at winning. . . but if the British crushed the first bit of help the French sent, there was no guarantee the French would ever send more aid.” –Anna Strong and the Revolutionary War Culper Spy Ring