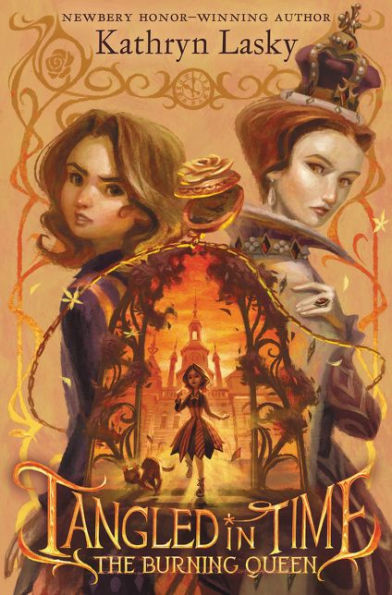 “Loneliness was like an impenetrable stone wall that grew up around a person, cutting them off from everything,” Rose. –The Burning Queen.

In the second installment of Tangled in Time, newly orphaned Rose finds herself time-traveling between the present day and the court of the two most memorable English princesses in history. When Princess Mary ascends the throne in sixteenth-century England, Rose is forced to serve her. Mary’s coronation is coming and Rose is put to work making elaborate gowns. But the religiously devout queen’s next plan is to begin her attack on the Protestants—by burning them at the stake!

Rose’s dad, master spy, and goldsmith for the court, urges Rose to escape to her home century, present-day Indiana, where Rose befriends a young immigrant named Marisol. Rose must protect Marisol from both middle school mean girls and the threat of U.S. Immigration and Customs Enforcement. Rose is determined to rescue her father and her best friend Franny from the dangers of Queen Mary’s reign. Is she willing to risk everything to save the people closest to her?

Readers who have not read the first Tangled in Time will not be able to understand the events in The Burning Queen. The story focuses on Rose and her friend Marisol, who is undocumented and an unaccompanied minor. Because of her immigration status, Marisol is frightened that ICE will take her to a detention center. Through Marisol’s situation, the pro-immigrant message is clear. This theme is reinforced when a doctor says, “many of us have been migrants at one time in our lives. It is not a crime.”

The story has many inconsistencies and questionable events. Even though the time travel is explained, the explanation is unbelievable. For example, when Rose returns to the past, she somehow knows everything that happened in her absence, and no one noticed that she was gone. Another questionable event is that Rose returns to the past in order to convince her father to travel to her time period; however, when she returns to the past, she hides from her father. In addition, Rose uses modern words and phrases and when people in the past question her, she “blamed every modern phrase she accidentally uttered on West Ditch, her supposed home village.”

Rose has a fashion blog that includes sixteenth-century fashion and modern fashion. Several of her blog posts are included; however, the pictures are of poor quality and do not reflect a modern teen’s blog. Rose uses words from her school vocabulary list, such as ecumenical and alacrity, but she never explains the words’ definitions.

The Burning Queen has many inconsistencies and holes in the plot that even younger readers will question. The complex, confusing plot, the questionable events, and the large cast of characters will make it difficult for readers to stay engaged. Readers may want to leave The Burning Queen on the shelf. For those interested in stories about time travel, the Ruby Red Trilogy by Kerstin Gier would make a better choice.

“Loneliness was like an impenetrable stone wall that grew up around a person, cutting them off from everything,” Rose. –The Burning Queen.