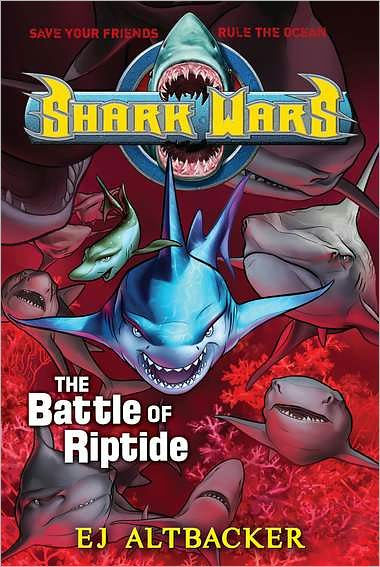 “You are special, but if you rely on your gifts without seeking to improve yourself, you will fail. And you cannot fail!” Takiza. –The Battle of Riptide

The Battle of Riptide

Gray and Barkley have always had to worry about Goblin shiver, but now the fish are whispering of a greater threat. Finnivus has a vicious armada, and he plans on expanding his empire. Finnivus won’t stop killing until he is the emperor of the seven seas.

Gray isn’t sure what he can do, but then Takiza appears. Takiza, a wise and mysterious fighting fish, has made Gray his apprentice. With Takiza’s instruction, Gray will learn what it means to be a great warrior. Gray isn’t convinced that he can learn how to defeat Finnivus and his armada. Can Gray find the courage to fight? Will he lead his shiver to a victory or to their deaths?

The second installment of the Shark Wars series ramps up the action as shark shivers struggle to survive. Finnivus, a spoiled king, gives the story a new, interesting threat. Readers will root for Finnivus’s demise because the young shark is a truly self-centered, evil king. Although it is no surprise that Gray will have to face Finnivus, the shark action is nicely interwoven between Gray’s training scenes.

New, interesting characters are added, which allows readers to see how the sharks must work together to defeat Finnivus. The battle isn’t portrayed in a glamorous way, but is portrayed as being ­­necessary to defeat evil. Although the death count is high, the deaths are not described in a gory manner. However, some readers may be upset when a shark eats her shivermates.

Readers who have not read Shark Wars may have difficulty understanding the dynamics of the characters. The sharks’ world is brought to life in a realistic, interesting way and includes shark language such as landsharks, shiver, chop chop, and greenie. The cover of the book has a picture of each shark, which allows readers to understand the size and physical differences of characters.

The Battle of Riptide explores the theme of loyalty and illustrates that loyalty should not be more important than doing what is right. The fast-paced story will keep readers interested with the well-developed characters, an evil king, and intense battle scenes. But the best part of the story is reading about Gray’s struggle to become a courageous leader worthy of being respected. With 242 pages and no pictures, Shark Wars is a good choice for fluent readers. Anyone who wants to swim into a good shark story will enjoy The Battle of Riptide. Readers will want to make sure they have the third book in the series, Into the Abyss, ready to read because even though Gray and his allies have won the battle, it is clear that the war will continue.

“You are special, but if you rely on your gifts without seeking to improve yourself, you will fail. And you cannot fail!” Takiza. –The Battle of Riptide