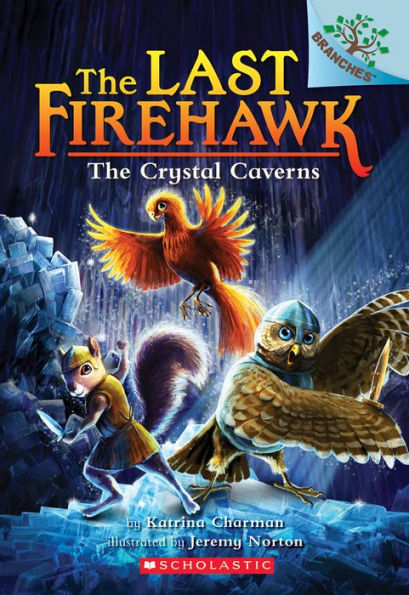 “I just wanted to explore—the sparkly caverns were so beautiful—but I couldn’t find my way out,” Coralie said. —The Crystal Caverns

Tag, Skyla, and Blaze band together to search for the next piece of the magical Ember Stone. They must find the stone before the powerful vulture Thorn. Finding the Ember Stone will help Thorn increase his power. Thorn also wants the last firehawk, Blaze. Can the three friends save Perodia from Thorn’s dark magic?

The second book in The Last Firehawk Series has a new adventure as the three friends seek the next piece of the ember stone. The three friends brainstorm ideas on how to get into and out of the Crystal Caverns. The addition of a new friend, a seal, gives the story additional interest.

While in the frozen world of the Crystal Caverns, the friends must defeat Thorn’s spies, the ice leopards. Blaze and his friends need to work together to defeat Thorn’s spies. Readers will enjoy seeing Blaze learn to use his powers. Even though he has not mastered his powers, he does his best to help his friends. Readers will learn the importance of helping others as well as working together. The Crystal Caverns has the right amount of suspense and action to keep younger readers interested without adding details that might scare them.

Although The Crystal Caverns can be read as a stand-alone book, readers will enjoy the story more if they have read The Ember Stone first. The Last Firehawk Series is written for newly independent readers and will appeal to readers seeking adventure. The story has many elements that will keep readers interested. The illustrations show emotion, and the ice leopards add danger and suspense to the story. Onomatopoeias are scattered throughout the story, which makes reading fun as well as adds to the mood. Short sentence structure, dialogue, and simple vocabulary make The Crystal Caverns easy to read. Black-and-white illustrations appear on every page, which helps bring the story to life.

The book begins with an introduction to help readers understand the conflict. A two-page map of Perodia gives a visual of the geography and location of important landmarks. The last page of the book contains four questions and an activity, which will reinforce important comprehension skills. Readers who love animals and a good adventure will enjoy The Crystal Caverns.

“I just wanted to explore—the sparkly caverns were so beautiful—but I couldn’t find my way out,” Coralie said. —The Crystal Caverns