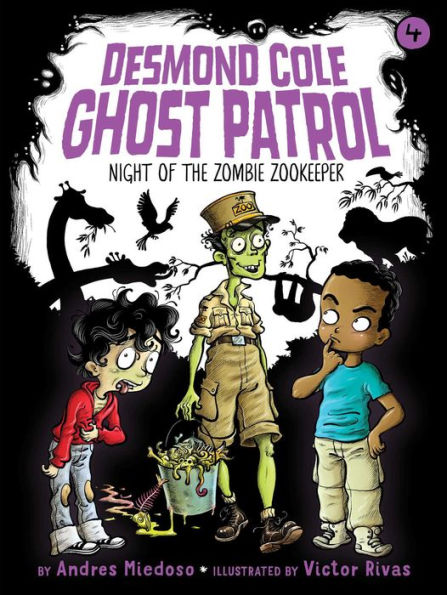 “I have to tell you, being in the dark with animals and a zombie was not my idea of a good time,” Andres. –Night of the Zombie Zookeeper

Night of the Zombie Zookeeper

Andres Miedoso is not like that at all. He’s Desmond’s best friend and ghost patrol partner. Desmond Cole and he are excited to go on a field trip to the zoo. They have planned out each and every exhibit they want to go to. They want to make sure they see all the animals. When the field trip day comes, they head to the back of the zoo. But when they see a zombie feeding the giraffes, their plan goes out the window. Instead of enjoying the animals, they’re chasing a zombie.

When it comes to Desmond Cole and Andres, they are opposites. Desmond wants to chase after the zombie, while Andres wants to run in the other direction. Readers will love the two boys who chase the zombie around the zoo. The story has suspense, humor, and a little bit of gross factor—the zombie accidentally dumps goo on Andres. Even though the story features a zombie, it is not scary. Instead, Desmond and Andres discover that zombies make great zookeepers. After all, zombies “don’t mind cleaning up the really stinky number twos! Also, zombies are never grossed out by the slimy, icky food they have to feed the animals.”

Night of the Zombie Zookeeper is the fourth installment in the Desmond Cole series, however, none of the books need to be read in order. The story is told in nine short chapters with easy-to-read vocabulary which is perfect for emerging readers. A black-and-white illustration appears on almost every page. The often humorous illustrations use exaggerated facial expressions so readers can tell what the characters are feeling. Readers will laugh as Desmond and Andres find themselves in unexpected situations. Readers who enjoy Night of the Zombie Zookeeper should also try the Notebook of Doom series by Troy Cummings.

“I have to tell you, being in the dark with animals and a zombie was not my idea of a good time,” Andres. –Night of the Zombie Zookeeper