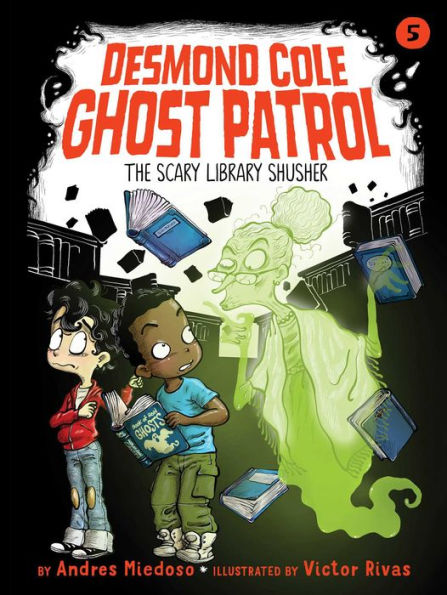 “If I was a ghost, I would haunt the arcade. That would be awesome!” Andres. –The Scary Library Shusher

Andres Miedoso is not like that at all. He’s Desmond’s best friend and ghost patrol partner. When our teacher gives us a research project, we’re excited to research the library. There should be nothing scary about the library, right? But once we begin our research, there’s a ghostly mystery woman who is causing all sorts of mischief. Can Desmond and Andres figure out what the ghostly woman is up to?

Desmond Cole and Andres are fun characters who are complete opposites. Desmond wants to chase after the zombie, while Andes wants to run in the other direction. Although the library isn’t the most exciting scene for a story, the flying books and spooky woman will demand the reader’s attention. Desmond and Andres learn that the book-loving ghost has a unique problem; one that the two kids help solve. The story has a humorous, unexpected conclusion that will leave readers smiling.

Although The Scary Library Shusher has a common plotline, it still has enough action, humor, and a non-scary ghost to keep readers interested until the very end. The story is told in ten short chapters with easy-to-read vocabulary which is perfect for emerging readers. A black-and-white illustration appears on almost every page. The often humorous illustrations use exaggerated facial expressions so readers can tell what the characters are feeling. Readers will laugh as Desmond and Andres find themselves in unexpected situations. Night of the Zombie Zookeeper is the fifth installment in the Desmond Cole series, however, none of the books need to be read in order. Readers who enjoy The Scary Library Shusher should also try the Notebook of Doom series by Troy Cummings.

“If I was a ghost, I would haunt the arcade. That would be awesome!” Andres. –The Scary Library Shusher