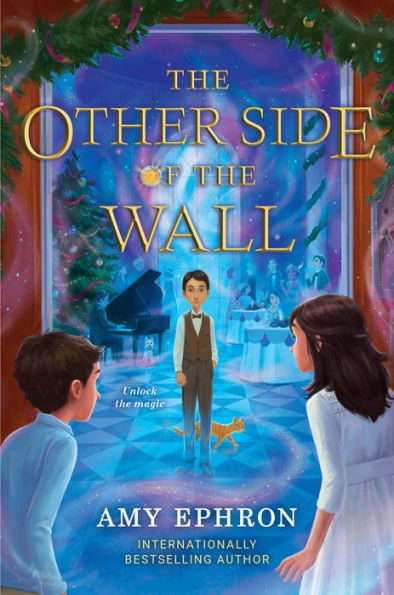 The Other Side of the Wall

It’s Christmas break. Tess and Max are in London staying at the posh Sanborn House with their Aunt Evie. As they wait for their parents to arrive, there is an unusual snowstorm that makes the city seem as if it’s caught in a snow globe. It’s the perfect weather for an adventure in Hyde Park. But when Max, Tess, and Aunt Evie leave to search for a cab, they find a horse, carriage, and driver curiously waiting for them at the curb. And that’s just the beginning…

Soon Tess is charmed by a mysterious boy named Colin who lives at the hotel all year round—on the 8th floor. Max is sure the elevator only had 7 floors the day before. How come everyone at the hotel seems to ignore Colin? Things seem to get stranger and stranger. There’s a 1920s costume party in Colin’s parents’ apartment, a marble that seems to be more than it appears, and a shadow that passes mysteriously by Tess and Max’s hotel window.

Tess wants to figure out what’s going on, but she finds only more questions. Is it just a coincidence that Colin’s last name is Sanborn, the same as the hotel? Why does the cat’s-eye marble look eerily similar to the crystal at the top of their hotel room key? And, most importantly, what happened in that hotel one Christmas long, long ago?

Tess and Max are realistic characters who travel back in time. The world building is beautiful, but some readers will quickly become bored because the beginning of the story lacks action. When Tess and Max meet Colin, they are slow to realize that he is a danger. When Colin possesses Max, Tess begins calling him “the person who used to be Max.” This phrase was used too often, and the repetition is annoying. Despite this, Tess’s dedication and love for her brother is both realistic and enduring.

Unlike traditional Christmas stories, The Other Side of the Wall is both mysterious and creepy. The story takes the reader back in time and ends with the sad death of Colin. Readers who have not read the first two books in the series will be slightly confused. Even though the story hints that Tess sometimes sees things that are not really there, her behavior is never explained. The Other Side of the Wall ends abruptly leaving many unanswered questions.

Anyone who wants to add a little fright to their Christmas night will want to read The Other Side of the Wall. The unique story replaces jingle bells for spooky spirits. However, if you’re looking for a fast-paced adventure, you will want to leave The Other Side of the Wall on the library shelf. For those looking to put a little scare into the holiday season, you might want to ask Santa to put Young Scrooge: A Very Scary Christmas Story by R.L. Stine into your stocking.