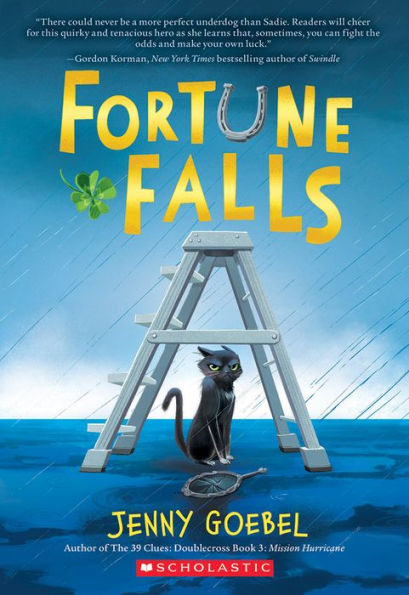 Other books by Jenny Goebel

In Fortune Falls, if you step on a crack you really will hurt your mother’s back. And four-leaf clovers, lucky pennies, and rabbit’s feet really do bring good luck. But twelve-year-old Sadie is used to being on the bad side of luck. When a cat the color of ravens begins following her, Sadie fears that her bad luck is irreversible and may be deadly.

The cat, and bad luck, seemed to be stalking Sadie. Sadie no longer expects to have good luck, but she is still determined to outwit fate. She has too much to lose if she doesn’t.

In just five days, Sadie is going to take the Luck Test, which will determine if she will go to Flourish Academy or be sent away. Her friend Cooper is determined to help Sadie come up with a plan to overcome her bad luck. But when Sadie breaks a mirror, her dog goes missing in a graveyard, and a black cat keeps following her, Sadie isn’t sure she can outwit fate. Is it possible for her to survive her bad luck? And if she survives, will she be sent away from everything she loves?

Sadie is a smart, clumsy, lovable heroine, who uses her wits to overcome obstacles in her life. Throughout the story, Sadie cares for her younger brother. Although their father is dead, his positive influence is shown through Sadie’s thoughts.

Throughout the story, Sadie learns many valuable lessons, including how people (and cats) are often misjudged based on their appearances and that friendships are more important than luck. At one point Sadie thinks about capturing the black cat and trading it for something that would bring her good luck, but she decides, “I wasn’t sure if it was worth being Lucky if it meant betraying who I was.” Because the story is entertaining, full of suspense, and has interesting characters, the book teaches lessons without being preachy. And in the end, the reader sees that “Fortune has very little to do with the charm and everything to do with perception.”

The ending of Fortune Falls doesn’t change Sadie’s clumsy nature. She is still imperfect and messy, but she no longer thinks that she needs luck or perfection. One of the best parts of the book is that Sadie conquers the mean girl without being mean herself. In the process of trying to outwit fate, Sadie leaves the reader with positive lessons as well as a story that will make them smile long after the book is put down.

Other books by Jenny Goebel