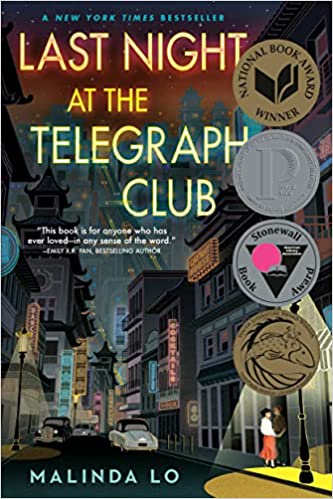 “Are you like the girls in the book too? Because I think I am,” Lily Hu. - Last Night at the Telegraph Club

Seventeen-year-old Lily Hu can’t remember exactly when the feeling took root—that desire to look, to move closer, to touch. Whenever it started growing, it definitely bloomed the moment she and Kathleen Miller walked under the flashing neon sign of a lesbian bar called the Telegraph Club. Suddenly everything seemed possible.

But America in 1954 is not a safe place for two girls to fall in love, especially not in Chinatown. Red-Scare paranoia threatens everyone, including Chinese Americans like Lily. With deportation looming over her father—despite his hard-won citizenship—Lily and Kath risk everything to let their love see the light of day.

When Lily is first introduced, she is shy and reserved which is evident in her interactions with her best friend, Shirley. Shirley is more outgoing and assertive and outshines Lily most of the time. Whenever Lily brings up her ambitions to study space, Shirley quickly dismisses them as boring and insignificant. In part due to her Chinese heritage, Shirley has more realistic goals—getting married and becoming a mother.

Then, Lily meets Kath. Kath encourages Lily’s ambitions and over time they become extremely close friends. Lily has been curious about the Telegraph Club (a lesbian club) after seeing an advertisement for it depicting a male impersonator. When Kath tells Lily that she has been to the Telegraph Club, Lily only becomes more curious about what is inside.  One night, they decide to visit the club. At the club, Lily discovers a whole new world that makes her question her identity.  Lily begins to explore her sexuality, which brings about an array of conflicts.

Readers will have no trouble relating to Lily. She is dedicated to her family and culture but simultaneously struggles to find her place in the world. She also wonders whether there is a place for her outside of Chinatown. Some of the chapters are dedicated to discussing Lily’s family members, which allows readers to get to know Lily’s backstory better. This includes her mother, father, and aunt. While these backstories are interesting and provide extra detail to the story, it would’ve been more interesting to hear parts of the story told by Kath or Shirley because they are much more involved in the plot line.

Another enjoyable part of the story is visual timelines that are provided every couple of chapters. Communism, McCarthyism, and xenophobia are big aspects of conflict within the Chinese community at this time frame. Therefore, these timelines give readers a wider view of what was happening during the 1950s.

Overall, Last Night at the Telegraph Club is a great depiction of young romance, especially LGBTQ romance. Kath and Lily’s love story is not straightforward, but has many twists and turns along the way which makes the plot more realistic. The book won the National Book Award for Young People’s Literature in 2021. This was the first time a book with a female LGBTQ lead won the award.

“Are you like the girls in the book too? Because I think I am,” Lily Hu. - Last Night at the Telegraph Club