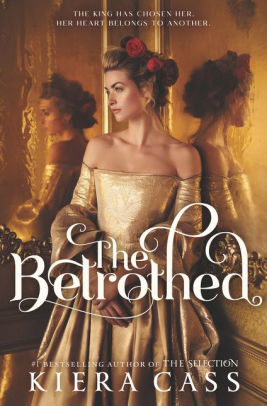 The King of Corona, Jameson, is young and handsome, but he is not the type to settle down. Everyone has watched him flirt his way from girl to girl. So when Hollis catches the King’s eye, she assumes that Jameson will quickly lose interest and move on.

Hollis has grown up at Keresken Castle among other daughters of nobility, most of whom hope to catch the King’s eye. So when King Jameson declares his love for Hollis, she is shocked. Hollis soon realizes that along with the extravagant presents and fawning attention, this new life brings expectations—expectations that make her wonder if she’s really cut out for life as a royal.

With a visit from the King of Isolte on the horizon, Hollis sees a chance to prove to Jameson—and herself—that she has what it takes to be queen. But when she meets an Isolten stranger with the mysterious power to see into her heart, she realizes the future she wants is one she never dared dream of.

Even though the story is told from Hollis’s point of view, it is hard to understand why King Jameson would want her as his queen. Hollis’s behavior is immature and self-serving. She doesn’t want to be a good queen for the sake of the country. Instead, she wants to be a good queen so others will admire her. This is reinforced when several characters, including Hollis’s parents, do not believe Hollis’s behavior is fit for a queen. Hollis’s self-serving nature makes it hard to relate to her struggles.

While The Selection Series by Kiera Cass is an engaging, action-packed series, The Betrothed has a weak plot and underdeveloped characters. For example, masked men kill everyone at a wedding. However, the murders are never investigated and the only death that seemed to matter was the death of Hollis’ husband. In addition, the conclusion is anticlimactic and unbelievable. The Betrothed is appropriate for middle school readers who may find the simple romance entertaining. However, most readers will want to skip The Betrothed for a more compelling romance such as What Light by Jay Asher or Pugs and Kisses by J.J. Howard.