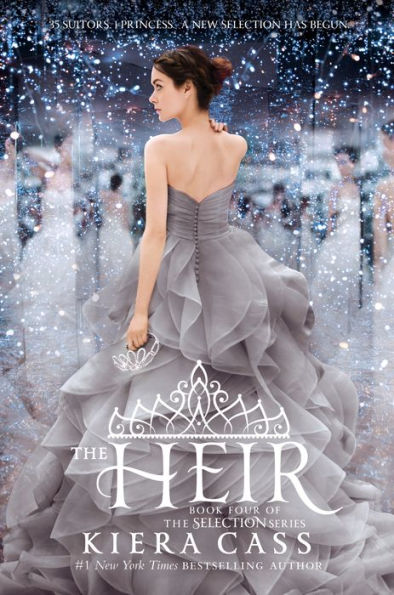 “This was why love was a terrible idea: it made you weak. And there was no one in the world as powerful as me,” Eadlyn. –The Heir

Eadlyn, the daughter of Maxon and America, is next in line for the throne and will be the first woman in her country’s history to rule by herself. Eadlyn is powerful—the last thing she needs is a man to get in her way. When unrest begins to develop throughout the country, Eadlyn’s parents come to her with a solution to distract the people while they attempt to settle the turmoil in the country—a Selection of her own.

Eadlyn is against the idea. She doesn’t see how babysitting 35 boys will solve the country’s problems. Eadlyn finally agrees to an attempt at finding a husband through the Selection but plans to sabotage it by acting as unpleasant as possible, encouraging the boys to leave on their own and finishing the Selection her way. However, Eadlyn quickly discovers that she must play to the eye of the public in order to win the public’s favor of herself as the next ruler in line for the throne.

As the Selection runs its course, Eadlyn finds herself enjoying some of the boys and doesn’t entirely hate the thought of them being in her house. However, with fights and attempted inappropriate touching, the press begins to show that Eadlyn doesn’t have control over her own Selection. Will Eadlyn finish her Selection with a husband and continue on to rule the country?

Readers won’t be able to put down this installation of the Selection series as they watch the newest generation of Illea’s royalty work through a possible uprising, budding romance, and a whole new type of Selection. Although the first few chapters of The Heir are slow, the pacing picks up and will leave the readers turning the pages to find out if Eadlyn will find the love of her life and still rule Illea. Readers will want to read the previous books of the Selection series in order to fully enjoy and understand The Heir.

Eadlyn is shown as a powerful, headstrong heir to the throne, who learns how to let her walls down. Eadlyn discovers that letting people see her as more than just a ruler, will actually benefit herself. At the beginning of the book, her condescending, blunt, and rude personality may turn away readers. However, readers will eventually fall in love with Eadlyn as she learns how to be the “people’s ruler.” Entertaining characters from previous books make appearances along with new, well-developed characters. Overall, these components create a storyline that will keep readers turning the pages. The story highlights the importance of family and friends and shows that with the help of others, anything can be accomplished. Because the conclusion of The Heir ends with a cliffhanger, readers will want to have the next book of the series, The Crown, on hand.

“This was why love was a terrible idea: it made you weak. And there was no one in the world as powerful as me,” Eadlyn. –The Heir