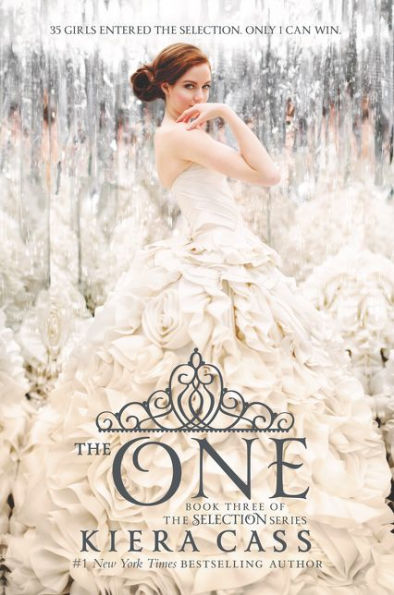 “‘Not wanting the crown means you’re probably the best person to have it,’” Georgia. -The One

As Maxon’s Selection has been narrowed down to the final four girls, competition between the girls is tight. America has noticed her growing love for Maxon, and her jealousy grows as she watches the other girls get closer to the man she loves. The King, however, will do anything to make sure Maxon doesn’t choose America, since she is from a lower caste, and the king can’t manipulate her. The King has started pressuring her to leave the Selection. Plus, America’s previous love, Aspen, has started working as a castle guard, and his presence threatens to unravel the progress Maxon and America have made in their relationship.

As the Selection wears on, rebels against the monarchy are becoming restless and threaten to overthrow the kingdom along with the caste system. Members of the Northern Rebels sneak into the castle and ask for Maxon and America. The rebels strike a deal with them on the promise that if the caste system is ended once Maxon becomes king, the Northern rebels will keep the Southern, more violent and ruthless rebels, at bay. Can Maxon and America trust the rebels? Or will the rebels overthrow the monarchy before the Selection even ends?

Readers will be kept on the edge of their seats in this final installment of the Selection series. The book’s twists and turns will help to drive the plot as America and Maxon make their way to the end of the Selection. This third and final book of the series picks up in excitement and romance that was lacking in the second book, The Elite. Though this book is very entertaining, readers will want to have read the previous two books of the series to understand the dynamic characters, the competition between the girls, and the Selection process as a whole.

America is once again shown as the headstrong, powerful woman that was introduced in the first book of the series. Entertaining characters from the previous books will make their appearances, along with new, well-developed characters that add excitement and more diversity to the plot. Themes of friendship, family, and standing up for oneself are seen throughout the story and will help to encourage readers to stand up for what they believe in. With the book’s heavy focus on America’s family and friends’ love and support, readers will recognize that with the support of their own friends and family, they can do anything.

The One has many surprises and a satisfying conclusion. Readers will want to have the first book of Cass’s continuation of the Selection series, The Heir, on hand.  The Heir jumps 20 years into the future, where readers learn more about Maxon, America, and their children.

“‘Not wanting the crown means you’re probably the best person to have it,’” Georgia. -The One