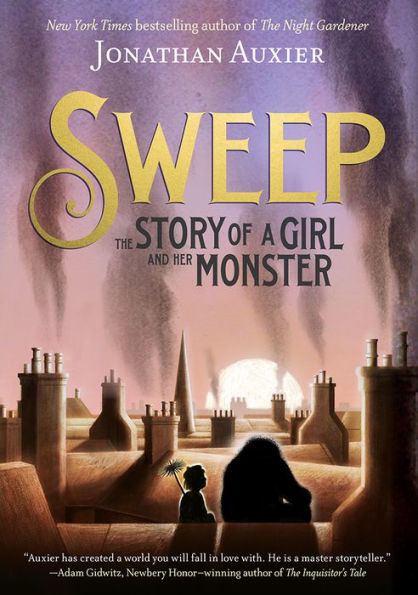 “The man who can read is a king among paupers. Better than a king, I’ll warrant,” The Sweep. –Sweep: The Story of a Girl and Her Monster

Sweep: The Story of a Girl and Her Monster

Orphaned as a child, Nan Sparrow is forced to work for a cruel chimney sweep named Wilkie Crudd. She and several other children toil day after day, sweeping out chimneys for nasty Mr. Crudd.

Cleaning chimneys is a dangerous job, and when Nan gets stuck in a chimney fire she thinks death is near. Instead, she wakes up in the house’s attic—and she’s not alone. A small piece of char has somehow come to life and needs Nan’s help to survive. Since everyone believes Nan died in the chimney fire, she takes advantage of her misfortune and decides to create a new life for herself and her monster, who she names Charlie.

From the very first page, Sweep captivates readers with beautiful writing that vividly displays the horrors of being a Victorian London chimney sweep. The story seamlessly flows back and forth between Nan’s life before she was orphaned, and her life afterward, when the man who took her in mysteriously disappears. Even though life with him was difficult, her life was full of love. The connection between Nan and the man (who is referred to as “the Sweep”) is deep and vibrant, and will leave readers curious to discover why the Sweep disappears.

The characters in this story are so well developed that every character’s unique personality shines through. As Nan begins to create a new life for Charlie and herself, she learns important life lessons. For example, while Nan would like to stay hidden from others, she eventually discovers that “We save ourselves by saving others.” Sweep’s suspenseful, surprising conclusion will leave readers in tears as they realize that cruelty and kindness are locked in a never-ending battle.

This story focuses on difficult topics such as poverty, child labor, and anti-Semitism. As Nan’s story unfolds, the difficult life of a child sweep in described in detail. Children faced harsh masters who fed them little, beat them, and sent them up chimneys where they were injured and sometimes died horrific deaths. One of the characters, Roger, became a sweep when his parents sold him. He turns into an unpleasant boy who dreams of becoming rich enough to buy his parents’ house so he can “raise the rent. Raise it so high, they’re put out on the streets.”

The publisher recommends Sweep for children as young as eight years old. However, this book contains long passages, difficult vocabulary, and shows humanity’s cruelty, which could be quite difficult for younger readers to handle. The book ends with historical information on sweeps, Victorian London, and a list of suggested books for readers curious to learn more. In this section, the author points out that, “today over 160 million children worldwide are forced into child labor. The battle is far from won.”

Sexual Content
• Master Crudd attends weddings. When Crudd said he wouldn’t be home for dinner, one of the kids teased, “Too busy kissing the brides for luck, eh, sir?”
• Nan tries to get other sweeps to march for a cause. One of the boys says, “Hammie’s just hopin’ to get a kiss from the flower girl on Hastings!”

Violence
• When Nan tries to grab her bowl of gruel, “a wooden spoon came down on her hand. She shrieked, clutching her fingers.” The woman caring for her told her she would not eat that day because she was late for breakfast.
• While cleaning a chimney, Nan gets stuck. In an attempt to get her out, Roger sets a fire. Nan shouted, “ ‘Roger, no—’ Her cries were cut off by a hollow whoof as the match hit the coals. Air sucked down through the chimney, like a beast drawing a deep breath. First came the smoke, a thick black tendril that slid up the flue and snaked around her neck. . . Next came the heat. It started as a prickling sensation on her back and heels, then spread up her legs. Within seconds, the warmth had turned to a blistering heat. . . Her entire body felt as if it were burning from the inside out.”
• Nan and the Sweep see “a pack of boys who were beating a smaller boy, calling him a ‘Jew.’” The Sweep chases the boys away.
• When Nan was little, she had a doll. A group of “young ladies” teased Nan and “one of the younger ladies snatched Charlotte (the doll) and waved her in the air . . . the doll circled and spun and then struck the ground with a sickening CRACK!”
• When a small boy drops a bag of soot, Roger “stomped up to Newt and struck him hard with the butt end of his broom.”
• Nan throws a snowball at Roger. “Perhaps it was her form, or perhaps it was her ire, but the snowball hit Roger with such force that the boy was knocked right off his feet and landed—splat—in the slushy gutter.”
• Master Crudd threatens to kill Nan and Charlie protects her. “Crudd gave a feral cry and lunged at Charlie, swinging the poker at his head. It connected with a dull crunch. Bits of sooty rubble feel to the floor.” Charlie grabs Crudd’s head and “Crudd screamed at the scorching touch. The room filled with acrid smell of burning hair, burning flesh. Charlie hoisted the man up and hurled him through the air . . . Crudd’s body smashed clear through the shuttered windows and into the frozen street.”
• When Nan was little, some men tried to put her in an orphanage. “The men grabbed the girl and locked her in a carriage. She had kicked out a loose board from the roof and climbed out to escape.”
• When the sweeps protest their work conditions, the master hits the kids. “The crowd gasped as the man brought the brush down on the boy with a thwap.” When people try to help the kids, “The sweeps—drunk and enraged—attacked anyone who touched them.” A riot breaks out.
• Master Crudd grabs Nan, and her friend tries to help, but “Whap! Crudd struck Toby in the face with his fist. The boy fell backwards and collapsed to the ground, unconscious.” In order to get away Nan, “threw her head forward—striking him straight in the nose.” Crudd chases her up a tower. “He reached out and snatched her ankle. . . She felt her grip break loose from the monument—And then Nan Sparrow fell . . . They struck the ground with tremendous force. The man died instantly.” Nan lays “bleeding on the street, moaning in pitiful agony, her body shattered beyond repair.” Charlie finds Nan and carries her away.

Drugs and Alcohol
• During a parade, the “master sweeps were already deep in their cups, enjoying free drinks in public houses all across the city.”
• A sweep “sounded drunk” when he yelled at his climbers. He said, “What do you ungrateful rats think yer doin?”

Supernatural
• Master Crudd attends weddings because “everyone knew that paying a sweep to attend your wedding guaranteed years of happiness.”
• A piece of char comes to life. “Whatever happened inside that chimney must have changed the char—brought it to life.” The char, named Charlie, isn’t sure what it is, but he’s not a monster. Nan thinks Charlie is a golem, which is a “gabled monster in the Jewish tradition, a homunculus crafted from mud or clay and animated through Kabalistic ritual.” A teacher tells Nan that a golem is made when “a sage or rabbi–that is, a Jewish priest—forms a body out of mud or clay and then brings that creature to life with a sort of magic word called shem.” The teacher explains shem “is kind of like a spark. . . Some say the word is a true name of God.”
• Charlie accidentally breaks a bird’s egg. Charlie holds the egg and his hands, “were smoldering. His dark fingers crackled and began to glow red and then white. Smoke billowed from his open hands. . . And then Nan saw something that snatched the breath from her breast—The egg moved.” The bird pecks its way out of the egg, and although the bird’s wing is damaged, it’s alive.
• Charlie holds an acorn and “there was a smell of cracking embers. Charlie’s hands began to smolder, just as they had done with Dent’s eggs.” The acorn grows into a tree. After he makes the tree grow, his fingers, “did not bend. They did not crumble. It was like touching a statue.”
• Charlie holds Nan, injured and bleeding, in his arms. “Nan could feel a flicker of warmth spreading through her broken body, bringing her back. . . She could feel his arms turning rigid around her.” Charlie uses his magic to save Nan.
• When Nan buries an ember from Charlie’s body, “the snow beneath her boots melted to reveal black soil. And there, pushing up from the earth, were little shoots of green grass.”

Spiritual Content
• Nan befriends a Jewish teacher. Nan sees a Jewish prayer book in the teacher’s room. Nan tells the teacher what she has heard about Jewish people. “The way some folks talked about Jews, it seemed as if all the pains of the world were because of what they had done. She knew that wasn’t true though; she’d suffered plenty at the hands of God-fearing Christians.”
• Nan reads a poem about sweeps. In the poem, the sweeps, “rise upon clouds, and sport in the wind. And the Angel told Tom if he’d be a good boy, He’d have God for his father and never want joy.”
• Nan tells Charlie the story of baby Jesus, who was “born in a basket and how a wicked king tried to kidnap him but then a big bearded angel named Father Christmas fought the king. ‘And then he tossed the baby Jesus down the chimney of a girl named Mary, and that was the first Christmas present.’ ”
• The teacher celebrates Passover. She explains that “the Jewish people eat these things to remember when God delivered us from slavery in Egypt. . . Before the Jews escaped from Egypt, God sent an angel of death to the city. The angel visited the homes of the Egyptians and killed every firstborn child as they slept. It was punishment for the wickedness of their parents. The angled passed over the homes of the Jews and spared their children.”
• When the teacher meets Charlie, Nan asks, “Does it make you believe in God?” The teacher replies, “It makes me believe that the world is full of wonders that I can scarcely imagine. Perhaps that is the same thing.”

“The man who can read is a king among paupers. Better than a king, I’ll warrant,” The Sweep. –Sweep: The Story of a Girl and Her Monster