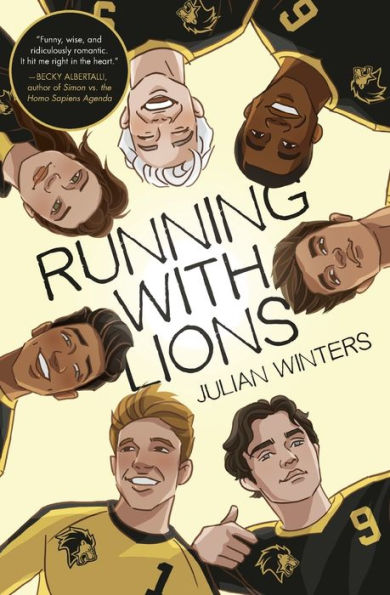 “Darkness goes away, but the sun shows up and you start over again. So let high school happen, and eventually you light up the rest of your life. Burn as bright as you want,” Lily Hughes. —Running with Lions

Sebastian Hughes is excited to start his senior high school soccer season. He’s the starting goalkeeper on his soccer team. His best friends, Mason and Willie, are also on the team. The three friends go to summer training camp where Coach Patrick welcomes everybody, regardless of sexual orientation.

Everything would be great, except Sebastian’s estranged childhood friend, Emir Shah, shows up at camp. Emir’s prickly personality makes team cohesiveness difficult. Sebastian realizes the team’s success may end up in the hands of the one guy who hates him. For the team’s sake, Sebastian reaches out to Emir. When Sebastian finally breaks through the initial barrier, he discovers that he and Emir’s friendship might evolve into something much more romantic.

Running with Lions has diverse characters, and the book tackles ideas about teamwork, friendship, and sexuality. For instance, Sebastian is bisexual and Emir is gay. Emir is also British Pakistani and sometimes talks about his experiences being Muslim. Many of the other characters have equally diverse backstories, but their stories aren’t fully fleshed out. Despite their differences, Sebastian’s teammates have a strong sense of camaraderie and loyalty, especially in the face of adversity from outside forces.

Despite the diverse characters, the plot is somewhat flat. The story primarily focuses on Sebastian and Emir’s budding relationship, and sometimes their relationship takes the focus off of soccer. Although the plot builds up to the first big soccer game after camp, it’s a slow climb to reach that point. The story and dialogue sometimes come off as choppy, cheesy, cliché, and occasionally confusing.

For soccer players, Running with Lions may be difficult to read because the soccer terminology is incorrect. For instance, Sebastian was “head-butting the ball to Zach,” when it should be “heading.” In addition, the Coach yells for “plays” to be run during a game when scripted plays don’t happen in soccer. These details make the action and the soccer camp setting unrealistic.

Although Running with Lions tackles important ideas about sexuality and friendship, soccer fans will find the incorrect soccer facts, the slow plot, and occasionally clichéd writing frustrating. Despite the diverse cast, Running with Lions may be one book readers leave on the library shelf. If you’re looking for a sports book with a diverse cast, look to Jason Reynolds’ Defenders Track Team series instead.

“Darkness goes away, but the sun shows up and you start over again. So let high school happen, and eventually you light up the rest of your life. Burn as bright as you want,” Lily Hughes. —Running with Lions