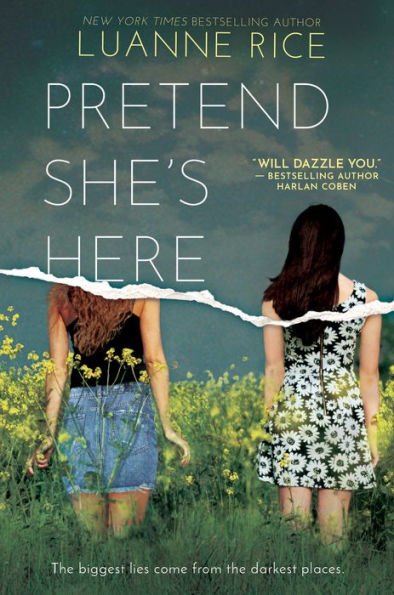 “I was becoming like a dog so used to being beaten its owner had only to raise a hand, a rolled-up newspaper, to send it cowering in the corner,” Emily – Pretend She’s Here

Emily can’t believe that her best friend Lizzie is gone. Every day she misses Lizzie now that she’s dead and her family has moved away. When Lizzy’s parents and her sister come back to town to visit Lizzie’s grave, Emily is happy to see them. Emily thinks that they are the only people who can understand her pain.

Emily doesn’t think twice about getting into the vehicle with them. After all, they are her second family. But soon, Emily realizes that Lizzie’s parents aren’t in town for a quick visit. Instead, they have come on a desperate attempt to bring Lizzie back to life. Soon Emily is trapped by the desperate parents, and she’s afraid there is no escape.

Pretend She’s Here is a unique story that has a major creep factor to keep the pages turning. The story focuses on Emily, who is kidnapped at the beginning of the book. Much of the story is told through Emily’s memory, which unfortunately eliminates much of the suspense. Emily’s large Catholic family is difficult to keep track of, and the many flashbacks of the seven siblings become confusing. There are simply too many characters to keep track of and many of them do not have a distinct personality.

Lizzie’s mom, Mrs. Porter, clearly wants to turn Emily into a replacement for Lizzie. The fact that Mrs. Porter’s family goes along with the plot allows the reader to see how desperate Mrs. Porter has become. However, Mr. Porter fades into the background, and readers will miss seeing how he fits into the family dynamic. The ending of the story is also a bit frustrating because Emily has so many chances to tell people who she really is, and yet she stays silent. At one point, she faints and is taken to the doctor, who sees many clues that Emily is in a desperate situation, but the doctor doesn’t act on her suspicions. Even though the author manages to make this unlikely scenario with the doctor believable, the ending of the book stretches the imagination too far.

Pretend She’s Here isn’t just a frightening kidnapping story; it also has themes of alcoholism, grief, friendship, and the power of forgiveness. While some readers may enjoy the kidnapping story, others may be frightened by it, especially because Emily is taken by someone who she considered her second family. Readers looking for a frightening story that examines the desperation that grief can cause will enjoy Pretend She’s Here. However, readers who are easily frightened should leave this book on the shelf.

“I was becoming like a dog so used to being beaten its owner had only to raise a hand, a rolled-up newspaper, to send it cowering in the corner,” Emily – Pretend She’s Here