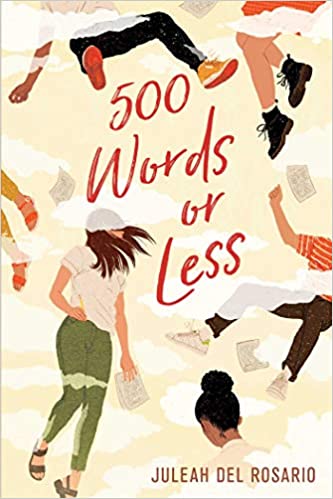 As Nic is asked to write more and more essays, she begins to walk in her classmate’s shoes. But the more essays Nic writes, the more unsure of herself she becomes. Weighed down by the guilt of cheating on her ex-boyfriend and writing other people’s essays, Nic questions the person she is becoming and if she is still the perfect straight A, Ivy League-bound teenager society wants her to be.

Written in poetic verse, 500 Words or Less is very approachable and is a great introduction to poetry and novels written in verse. Interestingly, Rosario includes the essays that Nic writes for her classmates throughout the book. Told mainly from Nic’s perspective, the reader will see Nic’s journey as she learns to move on from her failed relationship, deals with the heartache of breaking up with her first love, and rebuilds herself knowing she acted terribly wrong. Nic is a complex character. She is a determined, passionate girl, who has admittedly made mistakes. Readers will relate to Nic’s struggles with self-confidence, knowing who she is, and wondering if her actions define her. She explains, “I’m still the girl / who cheated on her boyfriend, / the girl who cheated / on those essays, / the girl who cheated / because maybe / that’s who I am.” Throughout this book, Nic learns to forgive and accept herself as well as forgive the people who have hurt her.

Through Nic and her classmate’s experiences in their senior year of high school, 500 Words or Less takes a look at the pressures of high school and of getting into the right college. Nic explains that she and her classmates “waited for our lives to change / with a single e-mail / from a university / that wanted us.” Furthermore, Nic explores the pressure she and her classmates receive from their parents to be successful and get into the right school. When Jordan, an old friend, tells Nic he is no longer going to Princeton, he explains, “I was always supposed to go / to Princeton. / Because I was supposed to become / my father, / and my father is an asshole.” In the end, Nic and Jordan end up not going to Princeton. Rather than following their parents’ dreams for them, Nic and Jordan decide to do what’s best for themselves, showing that getting into the perfect college will not make or break someone’s life and that any path after high school is valid.

500 Words or Less also touches on the topic of sexism. Nic points out that while people began to alienate her and write “whore” on her locker, everybody still likes Jordan, the guy she cheated with. She thinks to herself “was there even a male equivalent / to the word ‘whore?’/ There were words/ but none that carried / the same weight.” While Nic is outcasted, Jordan remains the popular kid, showing the blatant misogyny in the treatment of men and women even when they both make the same mistake.

The book also touches on racism. When Jordan asks Nic for help on homework in Japanese, Nic says, “You know I’m part Chinese, Jordan.” Jordan responds, “It’s like the same thing- / Chinese, Japanese, Korean.” In another instance, a friend tells Nic that she’s “lucky because / half-Asians were always prettier than/ white girls like her.” Nic feels uncomfortable when her friend tells her this. However, Nic isn’t the only person who feels stereotyped. In a college application essay, an African American classmate writes, “I want to attend [this college] because I want to be more than a football player. In America, this is not what young black men are supposed to do . . . I want to be more than an athlete, more than a black man who has a great arm.” Although people would like to “forget that race exists,” Nic points out the subtle ways racism leaks into society, negatively affecting people of color.

Furthermore, 500 Words or Less examines classism, as Nic’s school is predominantly full of upper-class students whose parents can afford to “[donate] handsomely to the school” they are applying to. Nic herself comes from a wealthy family. She admits that even though she charges $300 per essay, she doesn’t need the money. However, there are a few students who are lower class and do not have the same opportunities as the richer students. Unlike the rich students who know they can go to college no matter what, to some of these students going to college “means everything” as it is a path to upward social mobility.

Overall, 500 Words or Less is an engaging book, written uniquely with a diverse cast of characters. However, it’s best for mature readers because of the profanity, alcoholism, and normalized teenage drinking. Readers who are applying to college and figuring out what they want to do after high school will relate to Nic’s story and learn that getting into the perfect school is not everything. Furthermore, 500 Words or Less explains that the choices you make in high school do not define you. If you’re ready to jump into another engaging book with a protagonist who is trying to figure out who she is, grab a copy of I Am Not Your Perfect Mexican Daughter by Erika L. Sánchez.