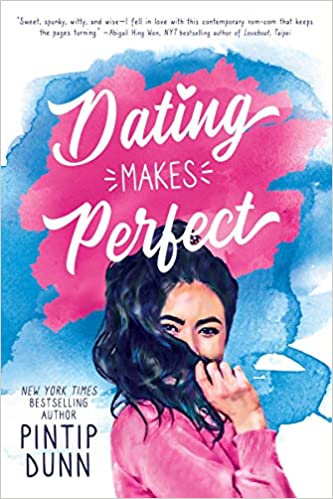 “But do you really think I would hear your voice raised in panic—and not do anything? Not many people could ignore a cry of distress. Least of all me with least of all you,” Mat. –Dating Makes Perfect

In a move that other Asian American girls know all too well, six months after the older Tech twins got to college, their parents asked, “Why aren’t you engaged yet?” The sisters retaliated by vowing that they won’t marry for ten (maybe even twenty!) years, not until they’ve had lots of the dating practice that they didn’t get in high school.

In a shocking war on the status quo, her parents now insist that their youngest daughter, Orrawin (aka “Winnie”), must practice fake dating in high school. Under their watchful eyes, of course—and organized based on their favorite rom-coms. Because that won’t end in disaster…

The first candidate? The son of their longtime friends, Mat Songsomboon—arrogant, infuriating, and way too good-looking. Winnie’s known him since they were toddlers throwing sticky rice balls at each other. And her parents love him. If only he weren’t her sworn enemy.

Winnie is tying to figure out family difficulties, first kisses, and who she is, all while trying to be an obedient daughter. But following her parents’ rules isn’t easy, especially when it means putting her own dreams aside. Winnie is an adorably cute and relatable character who deals with typical teen problems. While the story’s conclusion is predictable, Winnie’s journey through dating her sworn enemy is full of fun misunderstandings, near disasters, and inner turmoil. However, Winnie’s life isn’t just about romance, it’s also a sweet story about family, love, and acceptance.

Throughout her journey, Winnie must learn to trust herself as well as take risks when it comes to sharing her feelings. In the end, Winnie realizes that her parents’ love isn’t determined by her obedience. Instead of trying to fit their mold, Winnie finally discusses her true feelings. To complicate matters, Winnie’s confession is mixed in with her sister’s announcement that she is bisexual. The ending is a bit unrealistic because her parents readily accept the idea of her sister having a girlfriend, and they have more difficulty accepting the fact that Winnie wants to date Mat “for real.”

Dating Makes Perfect is the perfect book for readers who want a fun romance that revisits American rom-coms. The cute story is entertaining and has plenty of swoon-worthy moments that will make readers’ hearts sing. Plus, Dating Makes Perfect has a positive message about being brave enough to give voice to your dreams. In the end, Winnie gets the guy, and learns that “words do count. They can hurt, and they can heal. . . Maybe it’s neither words nor actions alone that have an impact. Maybe we need both.” Readers who enjoy Dating Makes Perfect should step into the world of two teens from feuding families by reading A Pho Love Story by Loan Le.

“But do you really think I would hear your voice raised in panic—and not do anything? Not many people could ignore a cry of distress. Least of all me with least of all you,” Mat. –Dating Makes Perfect