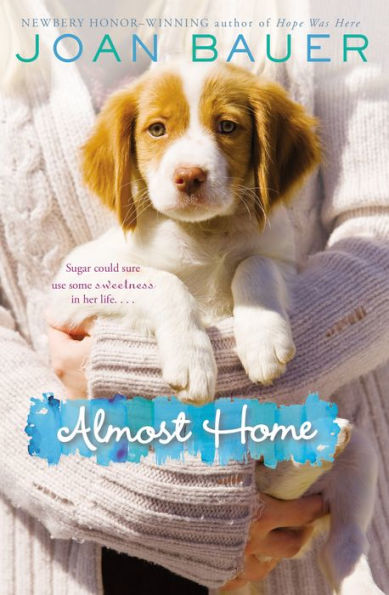 "Difficult relationships come into our lives for a reason. No one would choose them, certainly. But if we let them, they can teach us how to be flexible with others and more forgiving.”  –Almost Home

Sugar’s life isn’t perfect, but she’s content. She has a best friend, a teacher who encourages her to write, and a home to go to. When life throws difficulties her way, Sugar looks at the bright side. But when Sugar becomes homeless, she had a hard time finding the good in life.

Then Sugar’s mother Reba decides to move to Chicago hoping for a fresh start, but when Reba doesn’t get the job she had hoped for, she has a nervous breakdown. Sugar and her puppy Shush are moved into foster care. Throughout the story, Sugar holds on to her dreams and learns that life can be good, despite her circumstances.

Sugar is as sweet as her name. She is an engaging character that the reader will fall in love with. She pours out her feelings of fear, loneliness, and confusion through poetry, which allows the reader to understand Sugar’s thoughts and emotions. Sugar’s cute, fearful puppy is added to the mix which makes Almost Home even more enjoyable. As Sugar narrators her own story, the reader gets a glimpse of what it feels like to be homeless. Because Sugar is a sixth-grader, the story is told in a manner that is age-appropriate for younger readers.

There is much to like about Almost Home. Sugar meets interesting characters of all ages who add delight to the book. The majority of the adults in the book are shown to be kind people who only want to help. And even though Sugar’s mother Reba has a nervous breakdown, in the end, Reba shows that despite her imperfections, she truly is trying to be a better person because she loves her daughter.

Much of Sugar’s life lessons came from her grandfather, King Cole, who imparted much wisdom about not giving up. Even though her grandfather is dead, his character still shines through. Through sharing Sugar’s story, the reader will learn that sometimes taking one step takes great courage, but it’s necessary to keep moving if you are going to keep your dreams alive.

"Difficult relationships come into our lives for a reason. No one would choose them, certainly. But if we let them, they can teach us how to be flexible with others and more forgiving.”  –Almost Home