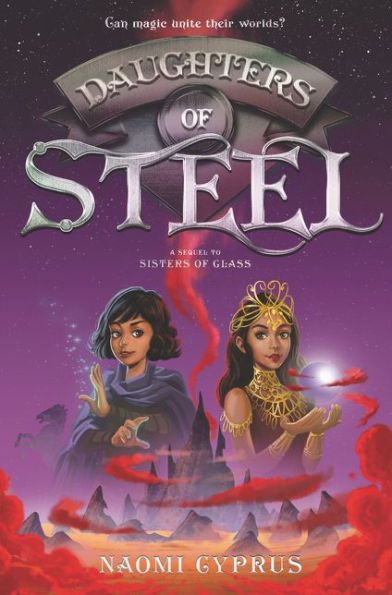 Other books by Naomi Cyprus

“Nobility is a privilege and a duty. Being born with a home, a fortune, a talent—whatever it is that sets you apart—that’s a challenge, to care for others and do not harm with what you’ve been given,” David Ferro in a letter to his son, Soren. –Daughters of Steel

Halan was a powerless princess. Now, she’s the queen of the Magi Kingdom, a blazing desert land where magic rules. Without any power, Halan wonders if she can be the queen her people need.

Nalah was a poor girl, from a kingdom that feared magic. Now she’s the Queen’s Sword, standing beside Halan at the helm of the kingdom. The more Nalah’s uncontrolled powers grow, the more dangerous they become. Will Nalah’s fear of her magic’s power cause her to hurt the people she cares about?

Nalah goes on a quest to discover how to control her powers. While she is gone, a friend from her world travels through the Transcendent Mirror asking for help. Halan decides to go through the mirror and help the Thaumas of New Hadar. As a dark threat draws closer, can Nalah and Halan reunite to save both worlds?

The second installment of the Sisters of Glass series continues the saga of Nalah and Halan; both girls need to learn valuable truths that will help them become leaders. Halan wants to be a good queen—one that will “stand up for people, do the hard things when it needs to be done, even if it means putting her own life on the line.” When Halan travels to New Hadar, she highlights the importance of caring for others, no matter their station in life. At one point, she tells her friend Marcus (a market boy), that “Your life and your brother’s and the lives of every single soul being held by the Hokmet are just as valuable as mine. If I were to put my safety above that of others, then I would be a very poor leader indeed.”

Nalah takes her own journey, where she must face several challenges. Throughout her journey, she learns that everything must have balance, and that she has to prove her own worth to herself. Even though Nalah learns important lessons during her travels, even younger readers may have a hard time believing some of the unrealistic events. For example, even though no one has ever returned from a journey into the desert, Nalan is able to cross the desert in two days, albeit she gets injured. Nalah is also able to perform advanced magic, with no new instruction; she even successfully performs a healing magic spell that her mother could not control.

Through the sisters’ experiences, readers will explore the qualities of a good leader, as well as think about the nature of good and evil. At one point, Halan thinks about those who care for their own safety and questions, “Or was witnessing evil and doing nothing about it just as bad as doing it yourself?”

Daughters of Steel has a complicated plot, graphic violence, and a ritual that requires collecting people’s blood. The story jumps back and forth between Nalah’s point of view and Halan’s point of view, which makes the story confusing at times. Although Sisters of Steel gives readers thought-provoking questions to consider, readers who are only interested in reading about sisters in a magical world may want to read The Unicorn Quest, which has less violence.

Other books by Naomi Cyprus

“Nobility is a privilege and a duty. Being born with a home, a fortune, a talent—whatever it is that sets you apart—that’s a challenge, to care for others and do not harm with what you’ve been given,” David Ferro in a letter to his son, Soren. –Daughters of Steel