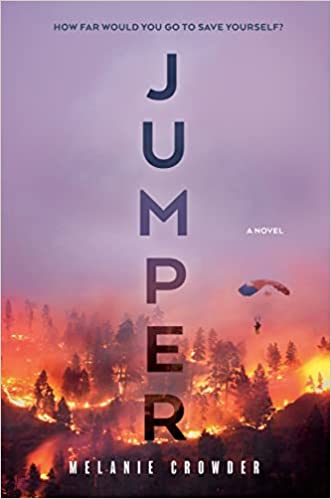 “I don’t know where to start, and I don’t know what to wish – that Jason never came to live in our neighborhood? That I didn’t ride past his house the day their moving truck pulled in? Or that I never saw a line of smokejumpers drop out of the sky?” Blair. —Jumper

Blair Scott has been “hell-bent on a career in wildland firefighting” since she was in high school. Being only nineteen, she and her longtime best friend, Jason, don’t expect to be recruited when the Forest Service calls for an additional class of smokejumpers. It’s a particularly rough fire season, though, and they are both accepted. The only thing holding Blair back is type 1 diabetes, and with Jason’s help, she is determined to hide her condition from their instructors.

Training is strenuous, and both Jason’s and Blair’s families become more insistent that Blair tell the truth. They point out that the medical forms for the job say “‘diabetes may be disqualifying. It’s not an absolute.’” Blair doesn’t want to take any chances. Things are going too well to risk stalling the momentum. Eventually, however, things do begin to spiral out of control. When tragedy strikes, Blair is forced to pick up the pieces and decide where she goes from this point.

Blair narrates the story, allowing for meaningful insights into her life and why she is so passionate about smokejumping. Also apparent is underlying guilt about Jason having to look after her. He is fiercely protective of her, to the point where Blair wonders if he would even be pursuing a job as a smokejumper if “he weren’t so committed to keeping [her] out of the ER.” This sentiment is most poignantly felt after a tragic accident that leaves Blair struggling to cope.

The friendship between Blair and Jason is the highlight of the novel. It is refreshing to see Blair, who is a lesbian, enjoy a strong but purely platonic relationship with a man. Their dynamic is very enjoyable. At one point, Blair playfully muses that “Jason and I always fall for the same girls, and ninety-nine times out of a hundred, it’s him they want . . . If I were interested in guys, even a little, I’d probably join them.” The reader feels the connection between these two characters very deeply, and, as a result, the experiences Jason and Blair have together are impactful.

Jumper is not a novel for everyone. The narrative is a slow burn that might be less than engaging for certain readers. A large portion of the story focuses on Blair and Jason’s training, and while it is undeniably an intense process and the risk of Blair having a health emergency looms, this part of the book is largely uneventful. In addition, Blair’s stubborn hotheadedness occasionally makes her difficult to like. Her ambitions are easy to empathize with, but her reckless nature can be frustrating as suspense is built around the danger she is putting herself in.

Despite the aforementioned flaws, Jumper is a solid story about two friends fighting against the world. Readers who are interested in platonic male-female friendships will get a lot of enjoyment out of Blair’s bond with Jason. Additionally, those who are diabetic will relate to the protagonist’s struggles. The book also contains plenty of interesting information about smokejumping and just how difficult and dangerous the occupation is. The reader will be left with an appreciation for people in this line of work. Readers who enjoy Jumper should also check out the Peak Marcello Adventure Series by Roland Smith which takes readers into the suspenseful world of rock climbing.

“I don’t know where to start, and I don’t know what to wish – that Jason never came to live in our neighborhood? That I didn’t ride past his house the day their moving truck pulled in? Or that I never saw a line of smokejumpers drop out of the sky?” Blair. —Jumper