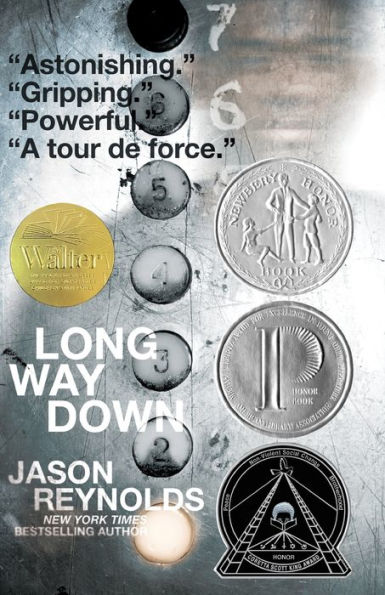 Somebody shot and killed Will’s brother Shawn, and Will thinks he knows who did it. The morning after Shawn’s death, Will picks up his brother’s gun and gets in the elevator of the apartment building with his heart set on revenge. That’s when things get weird.

Sixty seconds. That’s how long it takes Will to reach the bottom and exit the elevator, but in those sixty seconds Jason Reynolds crafts a story where Will confronts nasty truths about the events that killed not only his brother but his other relatives and friends over the years. Will faces literal ghosts in the elevator that he never thought he’d have to confront. In those sixty seconds, Will must shape the course of his life.

Although Long Way Down takes place over a course of a minute, the story is packed with twists and turns. Early on, Will learns that the other people who entered the elevator are ghosts come to warn him. Each ghost is someone from Will’s past, and through discussion and memories, Will forms new understandings about the violent, revenge-hungry world that has shaped him and his ideas of justice.

The ending is ambiguous and the reader does not find out if Will follows through on his revenge plot. It is clear from the ghosts’ stories and Will’s code of justice that if he takes vengeance, he’ll end up dead like the ghosts. It could be insinuated that they are asking Will if he’s ready to join their ranks by making the same mistakes. Will learns that violence is cyclical and feeds itself. Long Way Down has a heavy message but shows that Will has the power to choose a different path. Even though he and his family have been wronged, the themes within the story make it clear that revenge is never the way out. And, most importantly, Will is the only person in charge of his own destiny. The ghosts give him the tools to determine his fate, but only he makes his own destiny.

Will’s story is told free-verse which highlights the speed at which Will learns from the ghosts and the speed of the descending elevator. Long Way Down packs a punch because it’s short and moves quickly. In this way, the message never leaves center stage, but it’s also never beaten like a dead horse.

Long Way Down is one of Reynolds’ more serious stories, and the plot works well with the somber tone. It’s a hard-hitting tale that demands that each person evaluates the meaning of justice and the consequences of their actions. Some of the events described are dark and may upset younger readers, but these scenes all highlight the main themes. Long Way Down is an excellent story that presents the power of choice and compassion in the lives of everyone, including the people we never get the chance to meet. Fans of Charles Dickens’ A Christmas Carol will appreciate the similarities that appear in Long Way Down. While Reynolds doesn’t mold his story around the Christmas season, both stories show how one event can drastically change a person’s life.  Readers can also find Long Way Down in graphic novel format.