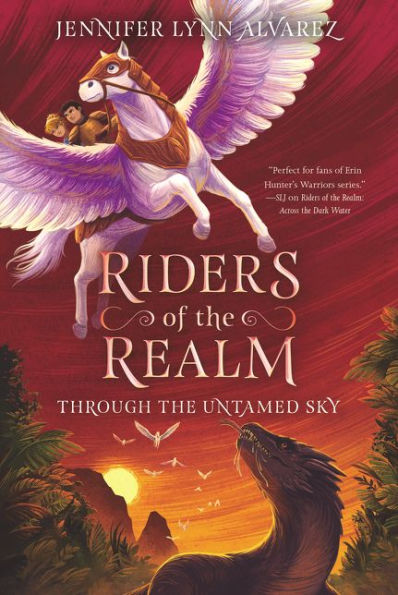 “You and Brauk must focus on the path in front of you. Don’t bend your eyes toward what should be or you will stumble,” Darthan. –Through the Untamed Sky

Through the Untamed Sky

Riders of the Realm #2

After winning the wild Pegasus mare named Echofrost in a contest, Rahkki Stormrunner is officially a rider in the Sky Guard army. Rahkki is terrified of heights though, and Echofrost doesn’t want to be tamed. But with Echofrost’s herd captured by the giants and a fierce battle looming on the horizon, the duo will have to conquer their fears if they want to fly with the army and free the herd.

Meanwhile, back in his village, Rahkki learns of a growing rebellion to overthrow Queen Lilliam. Unfortunately, the queen suspects Rahkki’s family is behind it, and she places him under intense watch.

As Rahkki and Echofrost escape to Mount Crim to save Storm Herd, Rahkki worries that the greatest danger may not come from the impending battle against the giants, but from within his own clan.

Through the Untamed Sky continues the story of Echofrost and Rahkki. In order for Echofrost to free her herd from the giants, Echofrost joints the Sky Guard with Rahkki. However, it soon becomes apparent that none of the Landwalkers (humans) care whether Rahkki lives or dies. To make matters worse, someone is actively trying to assassinate Rahkki. In a world where political power can only be gained by killing the current Queen, danger lurks in the shadows.

Although Echofrost’s desire to be free is understandable, she never thinks about Rahkki’s needs. Echofrost’s selfish behavior continues to the very end of the story. It takes a battle with the giants for Echofrost to see that “freedom meant choosing her bonds, because a Pegasus could not live alone or act only for oneself.”

The second installment of the Riders of the Realm Series shifts its focus away from Echofrost’s conflict and focuses more on the political unrest. As the story unfolds, Rahkki remembers the night his mother died. Even though the flashbacks help explain the political structure, readers may become upset that someone would kill a pregnant woman in order to gain the throne. The death of Rahkki’s mother is not the only violence in the story. An epic battle is fought and many lose their lives. Although the descriptions are not gory, there is blood and violence that may upset sensitive readers.

“You and Brauk must focus on the path in front of you. Don’t bend your eyes toward what should be or you will stumble,” Darthan. –Through the Untamed Sky