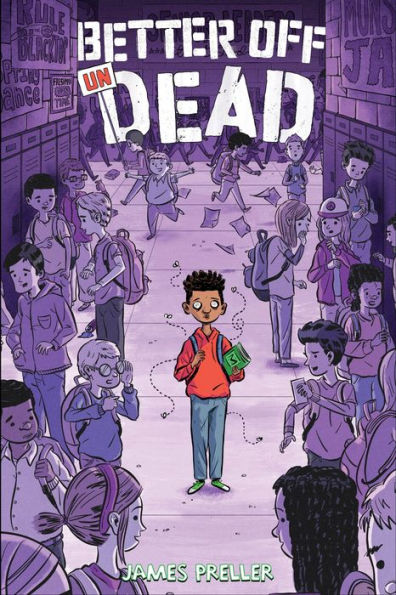 Other books by James Preller

Adrian Lazarus has always felt like an outcast. But now that he’s dead, life gets even worse. Even though Adrian does not have a beating heart, he still feels the pain of people talking behind his back. When the school bully, Daryl, decides to target him, Adrian isn’t sure what to do. Then a mysterious girl, a beekeeping boy, and a seventh-grade sleuth enter his life. Can his friends help Adrian stay safe?

Now that Adrian is a zombie, he notices that the world is changing. Forest fires burn, super-flues spread, and bees vanish. While advertisements claim everyone is safe, Adrian and his friends are worried. Is there anything they can do to help the earth?

Better of Undead takes a humorous look at the inside of a junior high school and explores the need to fit in. When the school bully targets Adrian, he and his friends come up with an interesting way to stop the bullying. As Adrian suffers through junior high, he learns that being beautiful isn’t important. It’s what inside that matters. He also realizes that he does not have to let his zombie instincts take over.

Adrian tells his story in a humorous way that will make readers laugh. At the end of the story, the action slows as the author reinforces the messages. One message is that the environment is changing and you should do something about it. The danger of having personal data mined is also shown.

Other books by James Preller