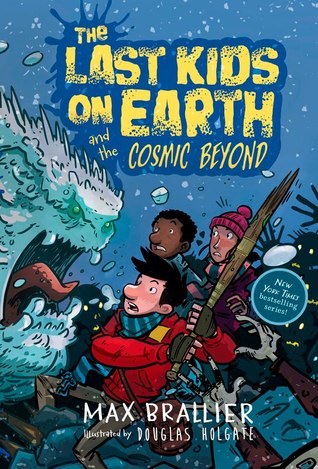 The Last Kids on Earth and the Cosmic Beyond

The Last Kids on Earth #4

Jack and his friends are looking forward to their first Christmas celebration since the monster apocalypse. Jack wants to show the monsters the joy of sledding, snowball battles, and gift giving. But their winter plans are put on hold when an evil human villainess begins hunting them.

The villainess hopes to create a portal to bring Ghazt, the general of the undead, to Earth. But first she needs Jack’s monster-slaying tool, the Louisville Slicer. When his prized weapon is stolen, will Jack and his friends be able to get it back? Will they be able to stop the villainess’s evil plan?

The Last Kids on Earth and the Cosmic Beyond takes a step back from monster fighting and focuses more on the kids’ winter activities. In order to show the monsters that snow is fun, the kids do a series of snow activities including ice fishing and snowball fights. But the activities make the “monsters extra freaked out. They’ve become afraid of snow in both flake form and ball form.” Readers will laugh as Jack and his friends try to show the monsters their traditions. Through these humorous scenes, readers will learn the importance of understanding different cultures. The story shows that some people may find different traditions strange because they have never heard of them.

Like the previous books, the story will keep readers entertained with its fast pace, funny scenes, and epic battles. The easy-to-read text contains dialogue bubbles, alliteration, and onomatopoeias that make reading the story a joy. The black and white illustrations that appear on almost every page bring the kids’ world to life as well as add humor.

At first, The Last Kids on Earth and the Cosmic Beyond may look like just another graphic novel. But the characters are surprisingly well developed and readers will come away with a valuable lesson about the importance of community. When Jack and the kids seek out a Warg, Jack realizes that “maybe she was watching because she felt that feeling, that’s the worst of all feelings. That feeling of being, like, left out?”

This story can be understood without reading the previous books in the series, but for maximum enjoyment readers should read the books in order. Readers will enjoy The Last Kids on Earth and the Cosmic Beyond. The story keeps the same humorous, non-frightening format as the previous books.