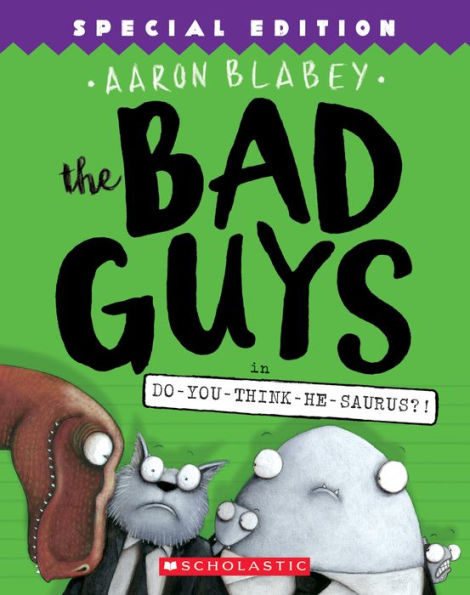 Other books by Aaron Blabey

“Wolf! Listen to me—We are in trouble. We are surrounded by hungry Velociraptors and all we have to protect us is a NAKED SHARK with some BUSHES ON HIS HEAD,” Snake. –The Bad Guys in Do-You-Think-He-Saurus?!

The Bad Guys in Do-You-Think-He-Saurus?!

The Bad Guys have flown through outer space, made it back to Earth, and managed to land in exactly the right place… but at exactly the wrong TIME. Who knew alien escape pods were capable of time travel?!? And now that they’re 65 million years in the past, they must avoid being eaten by dinosaurs and fix their broken time machine if they ever want to get back home before an evil alien destroys the whole world!

The seventh installment of the Bad Guys Series has the group hopping back in time. Hilarity ensues as Wolf, Snake, and Shark try to hide from the dinosaurs. Unfortunately, the story lacks plot—the group run around avoiding the dinosaurs and eventually make their way home. Although the black-and-white illustrations are comical, even younger readers will wish that the Bad Guys stayed in the past longer and learned about the dinosaurs.

One interesting development is that Snake acts like a leader. Even though Snake acts bravely, he tells Wolf, “I don’t want your job, you hair-brained lunatic. Who needs THAT kind of responsibility? I’m just your wingman. Your vastly superior wingman.” The Bad Guys’ time-traveling ends with each character having a new superhero power. After the story ends, “Broadcast was picked up by satellite, while being beamed from Earth into dark space.” The story transitions to a weird and random, “pilot episode [of] The Glamorous Life of Dr. Rupert Marmalade,” a “Bad Guys Tryout” quiz, and “Hiss-terically Funny” jokes.

Despite the story’s lack of development, Bad Guys fans will enjoy the familiar characters, the non-stop action, and the surprising conclusion. The Bad Guys in Do-You-Think-He-Saurus?! uses the same format as the previous books. The story pulls readers into the text in various ways. The large text has nine or fewer sentences per page, and many of the words are huge and bold. In addition to the large text, black-and-white illustrations appear on every page. Some of the illustrations are full-page, while others appear in panels. The illustrations show the story’s action as well as the characters’ facial expressions.

As always, the Bad Guys will continue to entertain readers with a unique cast of characters, an action-packed plot, and fun friendships.

Other books by Aaron Blabey

“Wolf! Listen to me—We are in trouble. We are surrounded by hungry Velociraptors and all we have to protect us is a NAKED SHARK with some BUSHES ON HIS HEAD,” Snake. –The Bad Guys in Do-You-Think-He-Saurus?!